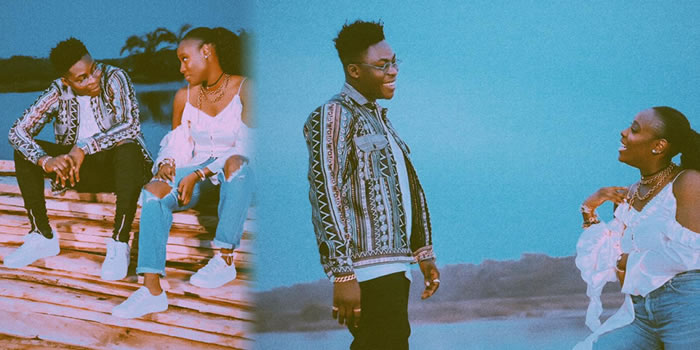 Reekado Banks and Tolani Otedola, Femi Otedola’s eldest daughter, have sparked a dating rumour just after their ‘loved up’ photos was shared on social media.

While entertainment insiders claiming it is a stunt or photos taken from behind the scene of a recent video shoot, Twitter users believe that there might be more to the recently released photos of Reekado Banks and Tolani Otedola.

Here are the photos and some tweets below;

How I wish this Tolani Otedola girl was dating someone like Kizz Daniel. But Reekado Banks is not bad, as long as she’s not dating that Social Media Lucky Dube, no problem pic.twitter.com/MUDeOGLUi3

Naira Marley gets verified on Twitter, 19 hours after dropping threat…

I have seen Tolani perform and she's got a great voice and good songs too. I can't wait to see what music these two have got but Tolani Otedola is way older than Reekado Banks, so ain't believing this dating thingy.

This one that it looks like Tolani Otedola And Reekado Banks are dating, please who is buying assurance for who?
Because Valentine’s Day is almost here o? pic.twitter.com/pyiPRg4rJC

Let me go and rerun the paynt I stole. They’ve stolen the girl I want to impress ???? pic.twitter.com/atCN0SztOV

Tolani otedola And Reekado Banks are now looking at each other somehow.

I’m not saying anything oh, but if it smells and looks like love. Then it’s porbaly love pic.twitter.com/o7hytu0XVU

You guyys , Rumor has it that even Reekadobanks seems to be having a thing with one of the Otedola’s daughter too..how true is this ?? pic.twitter.com/ToF0qRL8od

so all the otedola girls are taken ? please who knows his son's handle? I want to check something ? pic.twitter.com/cu2ryq6qR3

Reekado Banks has moved to the Tolani Otedola. Move to Rich girls.
2019 is the year to strap the bag guys! pic.twitter.com/zKoduqRuHd

ReekadoBanks: My papa no be Dangote or Adeleke… but we go de Tolani Otedola: Say no more. Otedola with the money ooooo ReekadoBanks with the sense

You guys should calm down!! Tolani otedola and Reekado Banks are not dating, it’s a song they’re dropping.

Asa Asika(Cuppy), Mr Eazi(Temi) , and Reekado Banks(Tolani) out there making money moves “Otedola” . What is wrong with my head sef? Anybody with digger over there? Make I start to dey dig-hunt

‘People think when they die, they take their money with them’ – Femi Otedola

DJ Cuppy To Her Father: “My Wedding Will Be Smaller Than Cuppy Gold Gala”