Pant thieves should be charged for murder because of their intention – Police PRO, Dolapo Badmos

A Nigerian policewoman have now reacted to the alarming increase of pant thieves.

Reacting to reports of young men stealing the undergaments of young ladies and women in the society for money ritual purposes, famous Zonal Police PRO, Dolapo has taken to Instagram to reveal the stand of the police in cases like this.

The police boss revealed that those caught in the act confessed to using the panties for rituals and as a matter of fact, some of the apprehended panties thieves, the owners of the stolen underwear end up dying prematurely.

“What is the in thing about increase in stealing of underpants?! Learnt the ones caught in the act always confess to be using it for rituals whereof the owner dies prematurely

….. Henceforth anyone caught stealing pants might not be charged for stealing but attempted murder

This has to stop.” 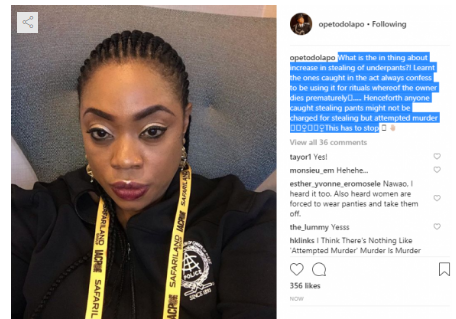 You may like to read; Drug gang members apprehended for attempting to sell marijuana to Ikoyi Prison inmates (Photo)