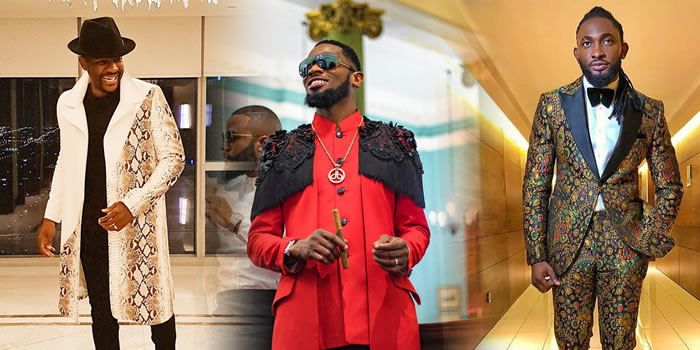 5 fashionable Nigerian male celebrities who have rocked the entertainment scene

The connection between entertainment and fashion is undeniable. Several celebrities pay a great deal of attention to their outfits because it has a lot of effect on how they are addressed.

Some Nigerian celebrities have, however, carved a niche for themselves as fashion icons seeing as their ensemble never fail to impress fans.

Legit.ng has gathered a list of five Nigerian celebrities that never fail to impress with their outfits at events or even on social media. There would be no list without the inclusion of Ebuka Obi-Uchendu. The media personality and lawyer has proven time and again that fashion is his forte. The father of one never fails to make a statement whether he is rocking a casual outfit or native attire.

One of Nigeria’s eccentric singers, Damini Ogulu, better known as Burna Boy, impressed Nigerians all over the world with his music in the past few months. His fame tripled and people became more aware of his fashion side. His style is quite unique and distinct as he shows time and again that he does not conform to society’s standards.

Nigerian singer, Dbanj, is another celebrity to reckon with in the fashion scene. He seems to look effortlessly stylish whenever he steps out to events. Uti came into the consciousness of Nigerians after he participated in a popular reality show, Big Brother Africa. Not many knew that he was a fashion guru in the making. The media personality has also modelled for top fashion brands in the country.

Popular dancehall artiste Timaya is not only a talented singer but a gifted fashionista. He knows how to make the most unusual outfits look effortlessly good.

These stars are just some of the few fashionable ones that have stood out in the entertainment scene.

Meanwhile we had earlier shared the top eight celebrity fashion blunders in 2018.

This is the real world where perfection is merely a dream, never a reality. As a result of this, most efforts made by celebrities to look perfect and be fashion gods and goddesses sometimes have traces of imperfections.

These imperfections might be outright wardrobe malfunctions, or a particular choice of clothing that does not fit well with their personality or body shape. Better still, it could just be an outfit that passes across the wrong message to fans and generates strong negative vibes from them.