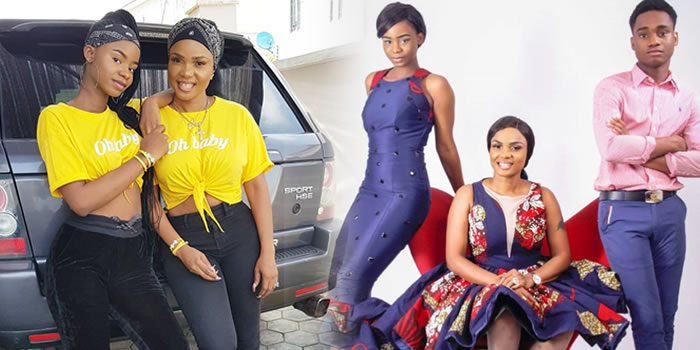 Nollywood actress, director and producer Iyabo Ojo’s name will always be mentioned in history of the Nigerian movie industry. The talented young lady built a brand for herself and has continued to remain relevant.

Born Alice Iyabo Ogunro on December 21, 1977, in Lagos, the 41-year-old actress was the youngest of three children. She attended National College, Gbagada area of Lagos before proceeding to Lagos State Polytechnic where she studied estate management.

Having been involved in drama from secondary school, she began her career in the movie industry in 1998 and registered with the Actors Guild of Nigeria (AGN) through the assistance of a colleague, Bimbo Akintola.

It could be recalled that in 1999, the actress took a break from her career as she got married. Although the couple are now divorced, the marriage produced two lovely children Festus Oladunjoye Ojo who was born in 1999 and Priscilla Ajoke Ojo, who was in 2001.

Iyabo Ojo and her daughter have maintained a special bond. Priscilla who might now be mistaken for her mother’s sister is a student of Babcock University, Ilishan-Remo, Ogun state.

When it comes to fashion, the actress and her daughter have become a force to be reckoned with. They both compete for the best hour glass shape, dress size, shoes and much more. It is obvious that Iyabo has a strong hold on her baby girl.

“Ugly people are ugly inside out”, Dencia drags Burna Boy and his girlfriend Stefflon Don