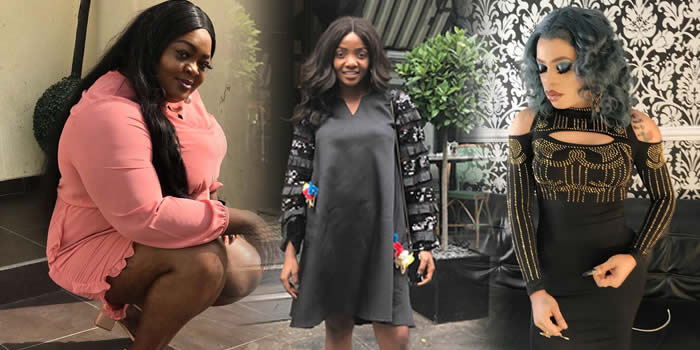 Living my best life! Does this phrase ring a bell? Well, it should, because these words are, in fact, the catchphrase used by most celebrities to show off the idolized sort of lifestyle they live. Indeed, when it comes to food, friends, fans, foes and FASHION, most celebrities, even in Nigeria, experience the best of all these and more.

When it comes to the world of fashion, Nigerian celebrities are, especially, known to be at the peak. The reason for this is not far-fetched. They are the face of the public, the eyes of the nation, the voice of the people. Hence, wherever they are seen (either in the bathroom, on the screen or on the red carpet), they are expected to not just be in their best behaviours but also in their best attires.

However, this is the real world where perfection is merely a dream, never a reality. As a result of this, all efforts made by celebrities to look perfect and be fashion gods and goddesses usually have traces of imperfections

Sometimes, these imperfections might be outright wardrobe malfunctions, it might be a particular choice of clothing that does not fit well with the celebrity’s personality or body shape. Better still, it could just be an outfit that passes across the wrong message to fans and generates strong negative vibes from them.

In the year 2018, some celebrities sort of flopped once or twice with their fashion sense which earned them the criticism of many of their fans and haters. Without further ado, here are top 10 celebrity fashion blunders that gave several Nigerians goosebumps and a whole lot of laughter.

There isn’t any need to introduce BBNaija’s Bambam. But if there is any one thing that should be said about her, it is that she is fashionable to a fault. The ex-contestant of the most recent season of Big Brother Nigeria has a knack for turning heads with her beautiful body and attires.

However, as she walked into the red carpet of the recently concluded Africa Magic Viewer’s Choice Awards (AMVCA), she did not just turn heads, she cracked ribs. Bambam who wore a beautiful turquoise feathery attire to the event attracted a lot of criticism from many fashion enthusiasts and her fans.

They could not seem to wrap their heads around the extremely massive, feathered shawl. Reacting to the criticism of her attire, Bambam took to posting several photos and labeling the ‘chicken nest’ as art.

Even more, a particular fashion analyst took to defending her choice of fashion statement with a very lengthy post. But then, many simply won’t buy it. Perhaps, the words of Martin Luther King rang constantly in their heads – “Never be afraid to do (or say) what is right especially if the wellbeing of a person or animal is at stake.”

From sweatshirts to body clinging attires to bum shorts and shiny accessories, Mama Jamjam is one fashionista that does not shy away from any style or piece of clothing all in a bid to slay. During the course of the year, the female artiste whose great voice and body has earned her the admiration of many Nigerians decided to take her fashion statement to a new level.

Hence, during an appearance at Wizkid’s famous O2 arena concert, the singer showed off more skin than anyone could ever have hoped for as she rocked a ripped bum short.

True enough, the eyes of her many fans popped at the sight of the lovely shape of the musician but their mouths ran wild with many criticisms of the rather exposing outfit. The negative comments given by most fans made the attire more of a fashion blooper.

A cursory look at this attire worn by sensational R&B singer Simi and it would appear like there is nothing wrong. As in, what could possibly be wrong with an black short gown that swallows the stunning shape of the beautiful musician and hides all the nitty gritty details that should be left hidden?

Well, that was what many considered to be the problem – the attire hides too much. In fact, for many of Simi’s fans, the A-shaped embroidered gown might just as well be hiding a baby bump.

Upon posting an image of herself wearing this attire, the one question that popped up in the minds of many was, “Is Simi pregnant?”. Soon enough, like wild fire, the news that the singer had a bun in her oven began to spread around.

What went ahead to make the rumour well grounded was that the Love don’t Care crooner posted the image of herself wearing this same dress thrice in a row. The responses of her fan to this action were hilarious.

nuga_hg: We get, you are pregnant

Of course, it took a while for Simi to get the gist that she had made a fashion blunder. But even more, it took much more time for the fans of the award winning musician to believe that she was, in fact, not pregnant.

Nollywood’s diva Mercy Aigbe falls under this list because of a beautifully patterned dress she wore during the course of the year. But then, the problem is not exactly the attire. It is actually with the picture of herself wearing the attire.

Nigerians are really detailed people, and when it comes to sizing up their celebrities, they are usually informed of the weight, size and shape of these stars. So, when they suspect that a celebrity is adding more weight or curves either naturally or artificially, they are usually quick to detect.

Coming back to Mercy’s case, anyone familiar with the viral phrase about a pillar that was forced to bend? Well, there is nothing more to say.

What is a celebrity without a good camera and great photo filter tools? For real, for a celebrity, having a good camera lens and photoshop skills is just as important as wearing good clothes. While most Nigerian stars have already realised this, it took quite a while for some of them like Bobrisky to get the hang of it.

During a jolly hangout with his fans, the controversial cross dresser stumbled on a fan who badly wanted to take a selfie with him. He obliged this person who seemed to adore him and posed for a photo.

The excited fan spread the picture all over social media. This ended up being a good move which turned out really bad because right there in the picture, the manly qualities of the effeminate celebrity which he has been trying to hide by all means got exposed. This case became like the proverbial fowl whose bum got exposed during a whirlwind.

So, you are thinking – what could probably be wrong with Tonto’s mini skirt and Fendi outfit. Well, on a first look, there is nothing wrong with it. But when you look past the fact the attire looks so good on her, and focus more on the colour, type and ‘brand’ of the Fendi T-shirt she is wearing, the problem with the dress becomes obvious.

After Tonto wore the famous Fendi T-shirt, many Nigerians took to comparing it with the ones worn by other female divas like Tiwa Savage, Chioma etc. To their shock, they found out that there was difference in the colour of the ‘Fs’ that are facing each other in opposite directions. Trust Nigerians to make a camp fire out of a gas stove, the news that King Tonto herself wore a fake Fendi item was quickly spread about like a rumour.

After Eniola Badmus wore this skimpy peach dress and squatted in a pose for a picture, a fan took to trolling on her and calling her out for acting like a small child. Of course, the actress gave a savage reply to her troll but this does not erase the fact that she made a fashion blunder.

Masterkraft, why? These were the words fans who stumbled on Masterkraft’s attire to BAAD 2017 could manage to utter. The famous producer who wore a mismatched combination of an aso-ebi cap and shirt, ripped denim and sneakers to the all important wedding of Bankole Wellington and Adesua Etomi was lambasted from head to toe by many savage Nigerians. Although this event happened towards the end of 2017, it still has the same epic effect it had a year back.

You may also like to read; 8 Stunning Photos Of Beautiful Nigerian Actress, Tonto Dikeh In Aso-Ebi Styles