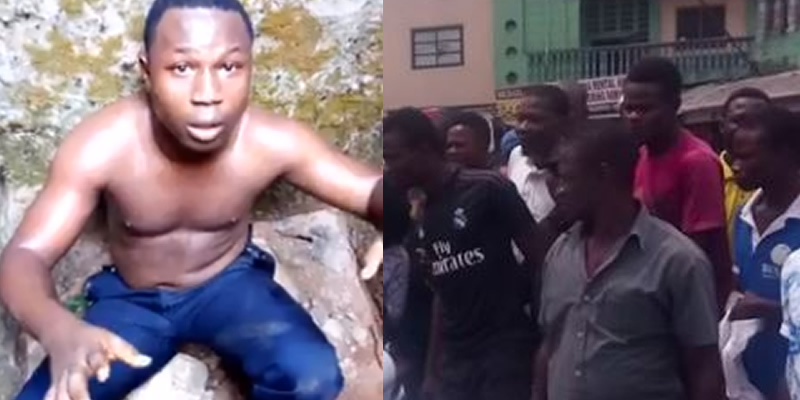 Edo Pastor confesses to sleeping with a member’s wife

A pastor was publicly humiliated after he was allegedly caught with the wife of one of his members in Benin, Edo state.

In a video going viral online, Pastor Innocent of Army of Power Ministry in Benin, Edo state, is seen confessing to sleeping with the wife of a church member.

The pastor and the woman were caught in the act by the woman’s son who then raised alarm, attracting members of the community. The pastor was then stripped of his shirt and taken to an uncompleted building where he was beaten. He then confessed to the act.

“How e take happen?” members of the community can be heard asking.

He went on: “Yes, na true. Everything na true.”

The son of the woman who caught the pastor with his mother can be heard in the background asking the pastor to narrate what happened and how.

The pastor said: “Me and your mama. Yes…. We we we sleep together for Aduawa.”

The son of the woman involved with the pastor asked him three times, “You sleep with my mama?” and each time the pastor replied, “Yes”.

He proceeded to ask the pastor in whose room he had intercourse with his mother, and the pastor replied: “Una house.