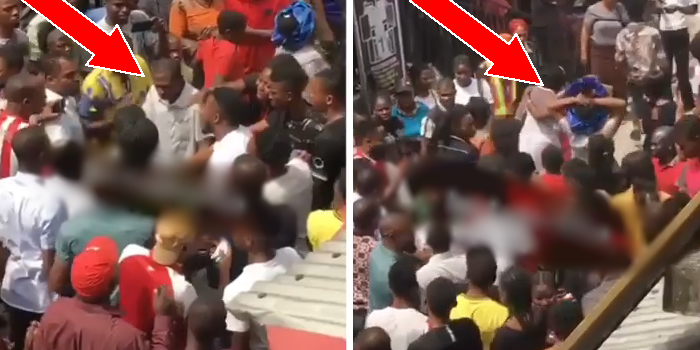 A video of a bride reportedly chasing her groom to a shopping mall in Warri, Delta after he called it quits at the altar has gone viral.

According to reports, the couple were tying the knot in Delta but the groom suddenly dumped the woman at the altar and made his way to Robinson plaza were intercepted a large crowd that begged him to listen to his woman.

The distraught bride could be seen putting her hands on her head and pleading with the seemingly upset groom to accept her back and let them proceed with the wedding.

The groom however seemed determined to walk out of the relationship even at such sensitive time. It is unclear what made the groom come to such decision but in the past, it has been heard that cheating couples are often dumped at the altar when discovered.

An interesting theory claimed that the groom must have realised he was stepping in a ditch and decided to completely avoid what he must have thought was a big mistake even at the last minute.

Bride in tears as she chases her fiancé to Robinson plaza after being dumped at the altar, today, in Warri, Delta State