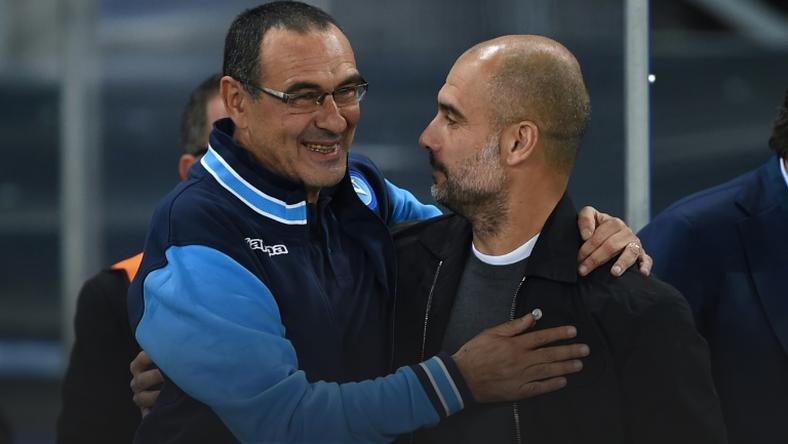 Despite preparing for the Catalan’s arrival for years with the hire of his former Barcelona colleagues Ferran Soriano and Txiki Begiristain, City scraped into the top four in 2016/17 by just three points thanks to winning their final four league games.

Sarri acknowledged on Friday a return to Champions League football next season is Chelsea’s target with a 12-point gap to City and Liverpool too big to bridge for the title.

The Blues enter the weekend holding onto fourth by two points from a surging Manchester United with Arsenal just a point further back.

That lead could be gone by kick-off at the Etihad, though, with United and Arsenal visiting the bottom two sides in the division Fulham and Huddersfield respectively on Saturday.

Yet, hope does exist for Chelsea should Sarri learn the same lessons Guardiola did after his first experience of the harsh winter months in English football.

Sarri did not suffer defeat for his first 18 games in charge until late November.

A run of five losses in 12 Premier League matches, most notably a 4-0 thrashing at the hands of Bournemouth last month, has since taken the shine off the Italian’s reputation.

Guardiola won his first 10 games in all competitions as City boss before things started to unravel. 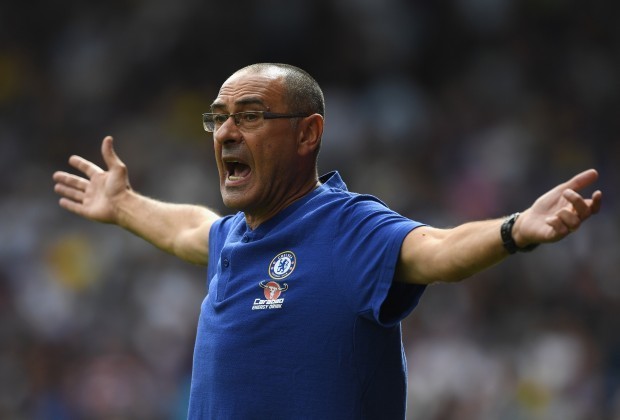 A 2-0 win at Everton on Wednesday night that took City back to the top of the table on goal difference came almost two years to the day since his side were thrashed 4-0 at Goodison Park.

“People believe we arrive with good players, good clubs and everything immediately must work,” said Guardiola on Friday of Sarri’s current predicament.

“Sometimes you need more time but I think the season from Chelsea is exceptional.”

Unfortunately for Sarri he may not be allowed the time Guardiola was afforded given the lengths City went to secure his signature and also the trigger happy culture at Chelsea under Roman Abramovich.

“We need to work. Guardiola is in his third season in the Premier League, (Liverpool manager, Jurgen) Klopp his fourth or fifth,” said Sarri on Friday.

“You have to be more competitive in the market or you need to work. We have to work and try to reduce the gap because at the moment there is a gap.”

The reference to the transfer market may prove another significant difference.

Guardiola was allowed over £250 million ($323 million) in transfer fees alone to transform his squad for last season on the likes of Ederson, Kyle Walker, Aymeric Laporte, Bernardo Silva.

Sarri is unlikely to be handed that sort of war chest to work with, but the former Napoli boss does finally have the striker he wanted after being reunited with Gonzalo Higuain in January.

The Argentine made an instant impact with his first two goals in just his second Premier League appearance in a 5-0 thrashing of Huddersfield last weekend to right the Chelsea ship after the Bournemouth debacle.

Higuain should not only add much needed firepower and a focal point to a Chelsea attack that had become toothless, but his presence also allows Eden Hazard to return to his preferred role on the left of the attack, from where he also scored twice against Huddersfield.

“He’s very useful for Eden and they are really very suitable to play together,” added Sarri.

Should Higuain and Hazard continue to hit it off, it will give Sarri some badly needed breathing space to try and follow Guardiola’s lead by coming good in his second season.

Ashanti showcases her behind in latex mini dress (Photo)