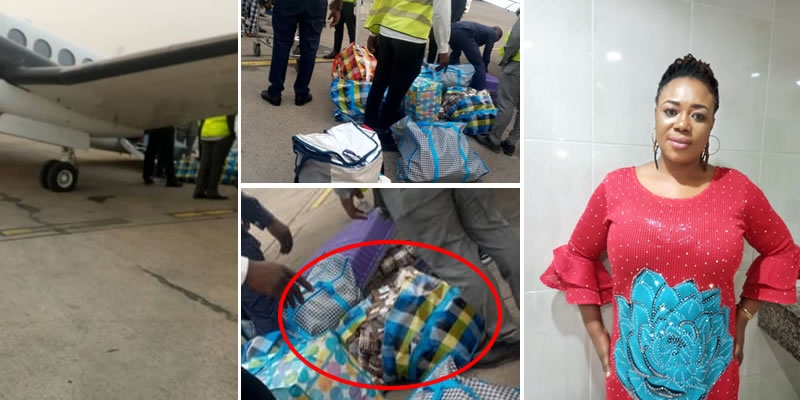 ‘APC will open CBN’, Political analyst claims as she expose politicians traveling with bags of cash ahead of elections

Photos of some Political Party Members traveling with over 15 bags of cash ahead of Presidential election at Abuja Airport, political analyst Benny Umoren reveals in a report.

According to a report, there was a brief clash among some party members who boarded a private aircraft at Abuja airport with over 15 bags of cash filled with both Naira and dollars. This reportedly happened yesterday, few hours hours to the proposed elections.

The allegation was made known by content developer and political analyst, Benny Umoren, who said that the party members involved belong to the ruling All Progressives Congress (APC) who are ready to buy votes during the forthcoming elections.

Let me tell you what played out in Abuja airport yesterday. APC will open CBN this coming week to meet up for more vote buying.

So yesterday the is a private aircraft operated by petrowest, Registration is N404SA.

This aircraft was to carry a particular group of APC to Edo state with cash, and they didn’t come on the agreed time…. So the captain agreed to carry another APC group that was looking for an aircraft to Katsina state, at this process the first group that this aircraft was waiting for came and the both group started arguing, this first group loaded the aircraft with 15 Ghana must go full of cash biggest size and four suitcase all with dollars and the aircraft nose up and hit it tail on the ground…..

One of the bag tore and the cash splashed on the floor (tamac) pictures below for the scene.