Over the years, online dating has sometimes been painted in a way that makes you want to avoid it rather than try it out. For example, RCCG’s Pastor Adeboye once said that ‘Couples who meet through social media will also lose them online’

And although there are success stories here and there, the predisposition towards meeting potential partners online remains less favourable than meeting people in real life. 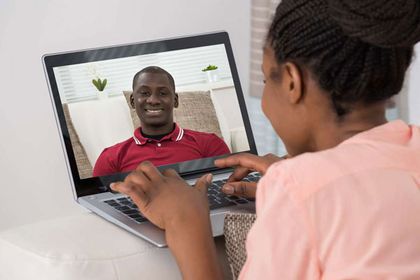 Simi laments about the “fake and noisy” lifestyle that…

One of the things usually held against online dating and giving someone a chance off social media is that it encourages catfishing, ghosting, uncertainties among others. But researchers at Stanford University say that meeting someone online or offline really has no bearing on what eventually happens in the relationship.

Relationships off social media are just as stable and healthy as those that started outside the virtual space. People who met in real life break up with the same regularity as those who met offline, according to the study which involved 2669 paired subjects.

The National Science Foundation-funded study was headed by Michael J. Rosenfeld, a social demographer at Stanford University who tells Quartz that: “I was a little surprised, given that the common wisdom about internet dating is that internet dating undermines relationship stability,” Rosenfeld told Quartz. “On the other hand, my previous research suggested that couples who met online were just as stable as couples who met offline, and this continues to be true.”

Texting or sexting with an online partner is no real indication that the relationship will be unsuccessful. [Credit Glamour]

What this means is that what we already know is true: there ain’t nothing wrong with shooting that shot on social media. The men and women on your social media pages are just as good for dating as those you run into in church, at the club, at work and other random places.

If you’re eyeing someone on your Twitter timeline, or one of your Instagram followers, go right ahead and pursue that Interest. If it’s gonna be, it’ll be. And your chance of having a great relationship is just as high as if you met them offline.

Photos And Videos From The “Surprise” Birthday Party Of ‘Pawpaw’

Eat These Foods If You Want Healthy and Long Hair