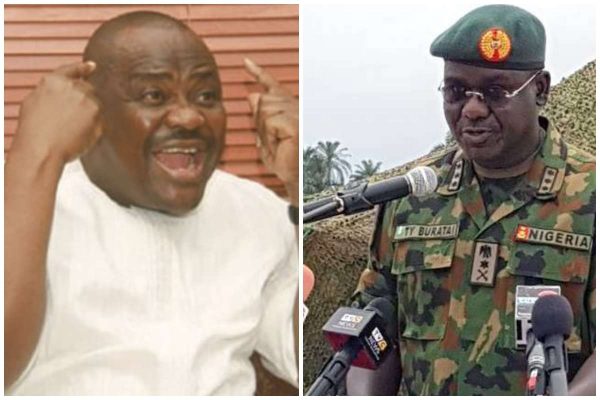 The Nigerian Army has described claims byc governor, Nyesom Wike, that soldiers attempted to assassinate him as a ‘cheap blackmail.’

Wike had claimed that soldiers from 6 Division tried to assassinate him on Thursday, February 21, 2019. In a statement, the Deputy Director, Army Public Relations, Col. Aminu Iliyasu described the allegation by Governor Wike as “lies and cheap blackmail against the 6 Division, Nigerian Army”. Read the full statement below;

The Nigerian Army (NA) wishes to respond to the bogus and unsubstantiated allegations being peddled by the Governor of Rivers State, Mr Nyesom Wike. Some of his rancorous claims were that the General Officer Commanding (GOC) 6 Division, Maj Gen Jamil Sarham purportedly sent troops to cordon off his residence prior to the rescheduled General Elections on the 15th of February 2019.The Governor further went on to allege an assassination attempt on his life which he claimed was orchestrated by the GOC 6 Division.

The NA is appalled that a Governor who should epitomize leadership and good example in all senses could descend so low to employ smear campaign against the person of a GOC whose only responsibility amongst other things, – is about the safety and security of lives and properties in his Area of Responsibility.

The NA does not train assassins as such the institution or her personnel cannot be involved in sending assassins to murder a state Governor as alleged by Gov Nyesom Wike.

It is indeed no secret to the military authorities that Governor Wike has on various occasions made attempts to compromise the integrity of the GOC 6 Division. Having failed, despites series of overtures and monetary pledges of millions of dollars, both in person and from cronies, it is no surprise that the frustrated Governor has resorted to this appalling campaign of calumny. One would have thought that the resolute and uncompromising stance of Maj Gen Jamil Sarham in the face of several kinds of mouth-watering inducements would have earned him a commendation from any conscientious leader. Alas, this was not the case from the embittered governor of Rivers State but rather, these slanderous allegations.

Despite these unsubstantiated ramblings however, the NA has deemed it fit to clear the air by letting Governor Wike and the general public at large, know that it would not be dragged into any form of political gerrymandering concocted for the furtherance of any person’s interest or notoriety.

As a noble institution, the NA is apolitical, neutral and would not compromise its constitutional roles under any guise. Additionally, the NA would like to give Governor Wike the benefit of doubt, to within 7 days, bring forth evidence that can substantiate the bogus claims, or he could as well, save face and keep his peace.