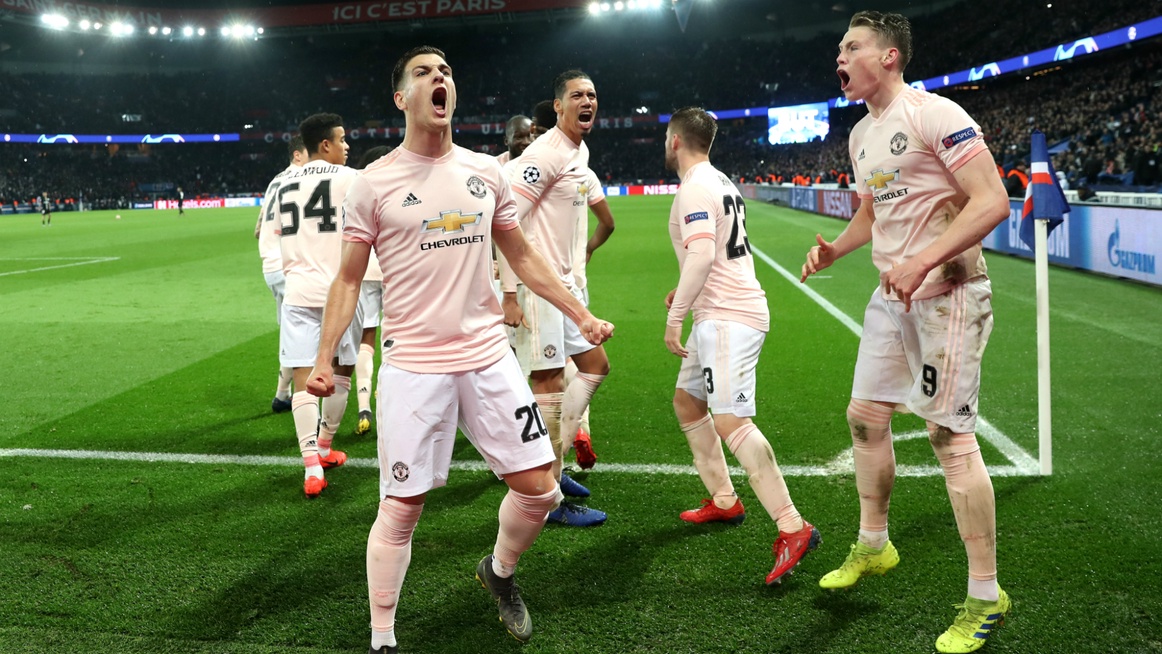 This season’s Champions League has thrown up two more contenders for the greatest ever comebacks – and we are only halfway through the round-of-16 second legs. Ajax stunned Real Madrid at the Santiago Bernabeu on Tuesday, before Manchester United made history of their own by overturning a first-leg loss to knock out Paris Saint-Germain.

United, of course, are no strangers to dramatic turnarounds in this competition, as caretaker manager Ole Gunnar Solskjaer knows only too well from his treble-winning exploits of 20 years ago. But where to these latest two results rank among the top Champions League comebacks? Have a look through our list and decide for yourself…

Barcelona remain the perpetrators of the most remarkable of all Champions League comebacks.

Trailing 4-0 from the first leg of their last-16 tie with PSG, Luis Suarez and Lionel Messi scored either side of a Layvin Kurzawa own goal, only for Edinson Cavani to grab what was expected to be the decisive strike for the visitors.

However, two quickfire Neymar goals – the second a highly controversial penalty after an apparent Suarez dive – levelled the tie at 5-5.

Then, in the fifth minute of stoppage time, Sergi Roberto struck to create a slice of Champions League history – no side had ever turned around a four-goal first-leg deficit before.

Comeback kings Barca were dethroned in the Italian capital last year as Roma completed one of the most unlikely turnarounds in quarter-final history.

Eusebio Di Francesco’s side came back from a 4-1 first-leg deficit to progress to the last eight on away goals after a thrilling 3-0 win in front of their home fans.

Deportivo were among Spain’s major forces just after the turn of the century and one of their finest moments in Europe came in April 2004 when, despite being 4-1 down from the first leg of their Champions League quarter-final with AC Milan, they stunned the Italians at home.

Walter Pandiani, Juan Carlos Valeron and Albert Luque had Depor ahead on away goals before half-time, with Fran Gonzalez – who played for them in the second division in the late 80s and is still their record appearance holder – fittingly scored the fourth to make sure of their passage.

Depor were eliminated by eventual winners Porto in the semi-finals, but this comeback stood as arguably the very best in Champions League history until Barca went one better.

That famous night in Istanbul. Liverpool found themselves on the end of a hiding at half-time in the 2005 Champions League final, as Paolo Maldini and a Hernan Crespo brace had the Serie A side 3-0 up.

But the second half proved to be one of the most iconic 45 minutes in Liverpool’s history, with goals from Steven Gerrard, Vladimir Smicer and Xabi Alonso levelling the match up by the hour mark.

Milan then failed to hold their nerve in the penalty shootout, as Jerzy Dudek’s leggy antics in the Liverpool goal helped the Pole outsmart both Andrea Pirlo and Andriy Shevchenko after Serginho blazed the first kick over, resulting in the Premier League side lifting their fifth European title.

Possibly the two most dramatic minutes in the history of European club football.

United were trailing 1-0 to Bayern Munich in the 1999 final at Camp Nou, with Mario Basler’s skidding free-kick into the bottom-right corner looking set to be enough for the Bavarian giants to end a 23-year wait for glory in the continent’s top-tier competition.

However, the United of Alex Ferguson’s era could never be discounted until the final whistle, and substitute Teddy Sheringham swept Ryan Giggs’ shot into the bottom corner to bring the scores level in the 91st minute.

Solskjaer, another late substitute and now the man in the United dug-out, avoided the need for extra time by stabbing Sheringham’s header from a David Beckham corner into the roof of the net as United completed an historic treble in astonishing fashion. Monaco 3-1 Real Madrid (5-5 agg, Monaco won on away goals), 2004

Monaco were an unexpected member of the last eight in the 2003-04 Champions League and had seemingly been put in their place after losing 4-2 at Real Madrid in the first leg, even if Fernando Morientes – on loan from the Spanish giants – netted their second late on to give them a chance.

A Raul goal nine minutes before the break in the return leg in Monte Carlo made their task even tougher, but Monaco rallied admirably – Ludovic Giuly pulled one back on the stroke of half-time, with Morientes then adding a second just after the restart.

Giuly – whose performances with Monaco ultimately earned him a move to Madrid’s bitter rivals Barca – grabbed the decisive goal midway through the second half to secure progression, with Didier Deschamps’ side finally halted by Porto in the final.

A 3-1 first-leg loss at Stamford Bridge – having trailed 3-0 – had Barca in danger of being on the wrong end of a major 1999-00 Champions League upset prior to the Roman Abramovich era, but in the return match the Catalans showed their true class.

Tore Andre Flo’s 60th-minute goal was sending Chelsea through despite Rivaldo and Luis Figo scoring before the break, but Dani Garcia scored seven minutes from the end of regulation to force extra time.

Despite their impressive display in their 2-1 first-leg defeat, nobody really seemed to think Ajax could turn things around at the Santiago Bernabeu. Sergio Ramos certainly did not – he earned a booking so as to avoid the risk of a quarter-final ban, earning an extra-game suspension from UEFA in the process.

In the absence of their captain, Madrid completely capitulated amid a fearless and thrilling Ajax display. Hakim Ziyech and David Neres put the visitors 2-0 up after only 18 minutes and it was 3-0 just after the hour mark thanks to the inspired Dusan Tadic.

Marco Asensio got a goal back, but Lasse Schone’s free-kick beat Thibaut Courtois and sent Madrid crashing out. It was the first time they had ever been knocked out after winning the first leg of a Champions League tie.

Just when you thought nothing would top Ajax’s thrashing of Madrid, United made history at Parc des Princes only 24 hours later.

No side had ever won a knockout tie after trailing 2-0 from a first leg at home, and with 10 senior players missing, including the banned Paul Pogba, United’s chances looked slim.

Romelu Lukaku scored just two minutes in, though, and despite Juan Bernat’s equaliser on the night, Lukaku struck again after a Gianluigi Buffon error to make it 2-1.

As the game crept towards second-half injury time, Diogo Dalot’s shot struck Presnel Kimpembe’s arm and the referee awarded a penalty after a lengthy VAR review. Marcus Rashford scored it, United progressed, and the clamour for Solskjaer to be given the permanent manager’s job grew louder.

5 signs your partner may not be emotionally smart