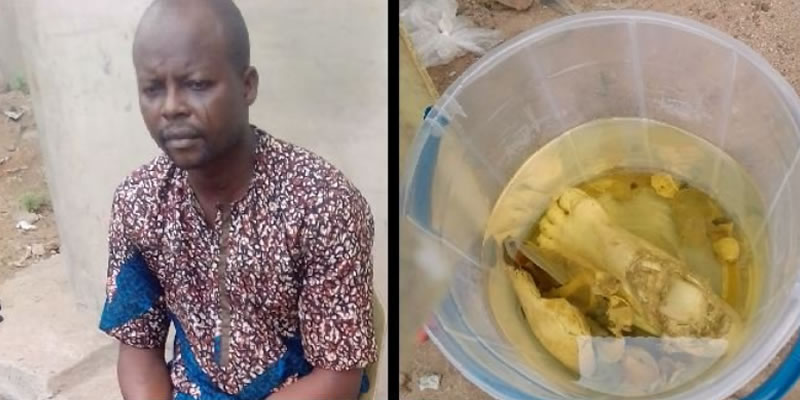 Some of the human parts recovered from the suspect include a severed human leg, which the IRT detectives preserved in kerosene in a plastic container, to prevent decay.

Following a tip off by an undisclosed source, that a certain herbalist in Ajuwon community in Ifo, Ogun State, was allegedly using human parts for herbal medicine, including money rituals, the leader of the IRT team in Abuja, Deputy Commissioner of Police (DCP) Abba Kyari, ordered the Ogun State IRT coordinator, a Deputy Superintendent of Police (DSP), Babalola Adekunle, to fish him out.

Adekunle subsequently led a team of detectives to arrest the herbalist in the house he built for his late wife in Ajunwon, Ifo, on February 15.

During the mission, the team recovered human parts, including the severed leg of a female and male said to have been used for money rituals.

Further findings revealed that Alabade owns many houses in the community, some of which are littered with shallow graves, from where he allegedly exhumes corpses to extract preferred human parts for ritual purposes.

Reacting to his arrest, the suspect, however,  maintained that he was innocent. He said: “This is a total set up by my known enemy, a fellow herbalist, named Segun. He had once told me that he would deal with me for exposing him to the police.

“I was doing security work as an OPC member. I used to help police to identify some of these dangerous elements in our society. Even in our association meetings, I used to emphasise these problems.

“Segun told me that he would show me for helping the police to arrest him. Yes, I used to inform the police of their atrocities because I cherish a decent society and I have value for human lives. He just set me up.

“I was arrested for killing people for rituals. I have not killed anybody. We have two graves in my compound. I have seven wives. Three died. I have five children.

“Let me advise the police. To reduce using human parts for rituals in Ogun State, they(police) should kill any suspect found with human parts after investigation had proved that the suspect really committed the offence or has the intention to commit.

“It is true that people are wickedly murdered for money rituals but I do not do it. I was set up by my follow herbalist because I reported him to the police.”

Sources within the police revealed that the suspect will be charged to court as soon as investigations are completed.