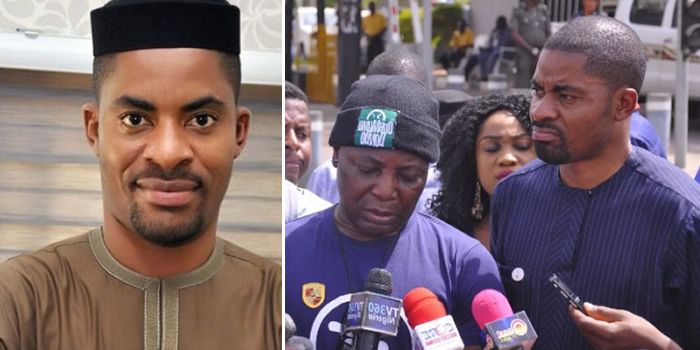 Deji Adeyanju has leaked a recording of the conversation in which Charly Boy admitted to receiving money from the same government their ‘Our Mumu Don Do’ movement is challenging.

Yesterday, Deji Adeyanju took to Twitter in response to an article about his resignation from the movement.

“I didn’t want to respond or ever say a word about my withdrawal from Our Mumu Don Do but going through this vanguard report, I must now clear the air.

Charly Boy is the number one Mumu in Nigeria. “

“He compromised by collecting money from the government while i was locked up in prison by the oppressors. He collected money from them to do a video against the main opposition candidate -Atiku and also to stop attacking Buhari.”

Deji Adeyanju also revealed that he had a recording which has Charly Boy confessing to receiving money from the government.

“When I confronted him -Charly Boy with the evidence, he confessed to collecting money from them but said he didn’t collect the money to do a video against Atiku but they gave him the money as support. I dare him to deny this allegation.

I have the recording of his confession.”

Below is a video of the conversation in which Charly Boy admitted to receiving money from the government.

Listen to Audio below;