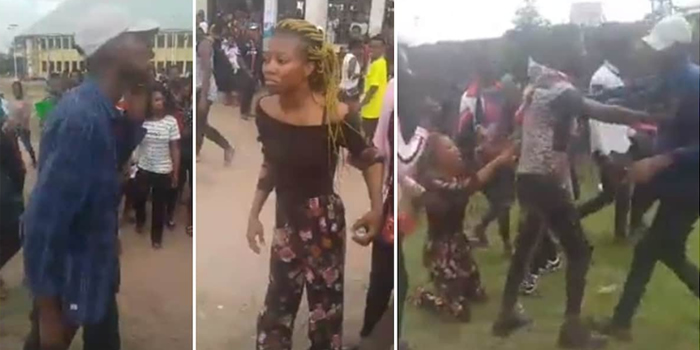 Jilted boyfriend openly beats up girlfriend after dumping him

A video has since emerged on the internet believed to have been shot at Michael Okpara University, which involves a scorned lover who was dumped by his girlfriend after he claimed to have paid her school fees.

It is a common knowledge that people often get into relationships for different reasons and most times, leave when their needs are fulfilled. This was the case of the two lovers who caused quite a scene at the Michael Okpara University, Abia state.

In the video, the young man is seen chasing after the girl, demanding for his money while a crowd gathers and follows what appears to be hot drama about to unravel. The lady who appears to be protected by some guys, ends up getting a hot slap from the enraged ex-boyfriend who wants nothing but his money paid back in full.

While some students are seen trying to stop him from doing anymore damage to the helpless girl, others are trying to stop the girl from escaping the scene, something she tries continuously as the crowd grows.