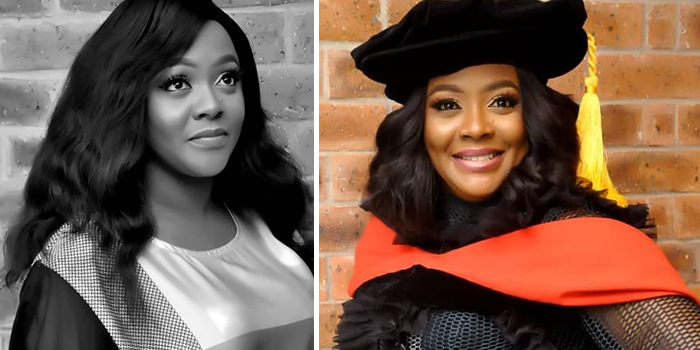 Popular Nigerian actress and comedienne, Helen Paul has bagged a Ph.D in Theatre Arts from the University of Lagos.

Paul is also a stand-up comedian, popularly known as Tatafo, characterized by a voice range that makes her sound like a child, is the first among her Nigerian colleagues to bag a Ph.D.

The comedian, who is also a singer announced the news on her Instagram handle, @itshelenpaul on Friday, March 29, 2019.

“Can’t wait to wear my beautiful gown on Thursday. Special thanks to the University of Lagos, for finding me worthy of this great position as the first Nigerian stand – up comedian to have a PhD (Please argue with the gods) #helenpaul #drhelenpaul.

“ MIGHTY Thank You to God almighty for using my mentor and teacher as my supervisor (Prof. Osita Ezewanebe), mama tough no be small, days of crying, fasting, waking up at midnight to pray and even swearing, then asking myself questions like Helen Paul Who send you?

“To my husband, Papa thank you for your encouragement, your words are sweet ( do it jor, babe face that fear, I can’t wait to see a doctor as my wife every morning).

“ You are all invited to the University of Lagos as my convocation is on the 4th of April. (Positive minds only) @officialbunmidavies thank you for all the free food, my roommate is also grateful and now we are missing our rooms. (Back to the wife and mummy duties fulltime) POST DOCTORATE NEXTTT!!!!!” she wrote.

Paul has worked as both a freelance and full-time presenter at several media houses in Nigeria including Lagos Television (LTV 8), Continental Broadcasting Service (CBS), and MNet (where she currently co-presents “JARA” on Africa Magic).

She broke out as a naughty comic character on a radio program known as “Wetin Dey” on Radio Continental 102.3FM, Lagos and popularly known on the programme as “Tatafo” – a witty kid that addresses and lampoons societal issues in a satirical manner.

Others are 2012 National Institute for Cultural Orientation, 2009 Exquisite Lady of the Year Award, Female Comedian of the Year, 2012 Effizie Style and Effects Awards, 2012 Sacramento Productions – Children’s Entertainer of the Year.