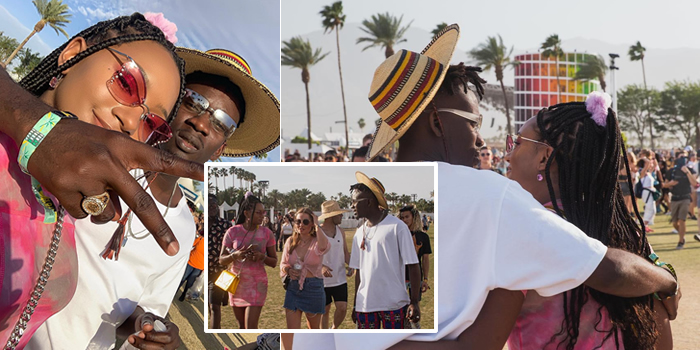 Fashion entrepreneur and daughter of a popular Nigerian billionaire Temi Otedola, was recently in the United States of America to support her lover, Mr Eazi who was billed to perform in an international music festival, Coachella

The lover girl joined her singer boyfriend Mr Eazi, who was in California to make an appearance for his billed performance at the 2019 Coachella music festival.

Temi was in her feelings as she shared several photographs in which she was spotted at the venue where the event was taking place. In some of the photos, she was perched beside her lover as they struck different poses for the camera.

One of the photos shows the two lovers who cannot seem to get enough of each other, wrapped up in a warm embrace as they were captured by the camera.

A visit to the singer’s page also shows him flaunting pictures of his heartthrob who took out time to stand by him.

Fans and followers could not stop gushing over the celebrity lovers. See some comments below:

Rudboiswagg: Love no catch u before

Mis_onyinyechi: I love your relationship dear quite and matured. Have fun with your sweet boo. Lots of love from Lagos ❤️❤️❤️❤️❤️

Glowiafashionista: Love is powerful and beautiful

Knowthelatest: I so Love this

Why Tiwa Savage Is The Biggest Female Singer In Africa, Her Engulfing Profile, Career And Personal Life