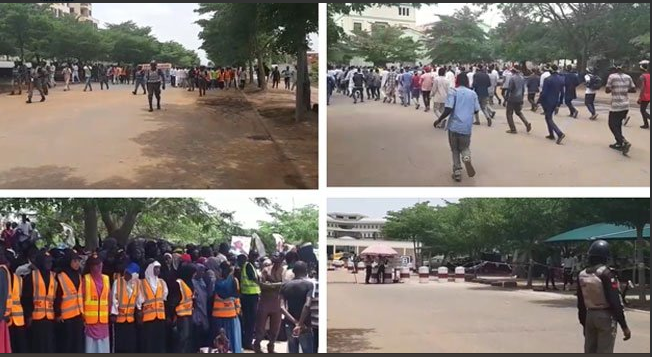 The Islamic Movement in Nigeria (IMN) has taken its protest to the United Nations office in Abuja.  Faithfuls of the protesters want the United Nations to urge President Muhammadu Buhari to release their leader Sheikh El-Zakzaky who is standing trial alongside his wife over allegations of culpable homicide, unlawful assembly, and disruption of the public peace, among others.

They also accuse the government of mass killings and burials of their members. The protesters were received at the UN office by the deputy security head. Thursday’s protest comes after a similar march was staged on Wednesday at the main gate of the National Assembly.

However, Wednesday’s protest had a bit of violent undertone, as the Shiites forced their way into the Assembly complex, protesting the continued incarceration of their leader, Sheikh Ibraheem El-Zakzaky.

The protesting Shiites stormed the National Assembly in continuation of protests to mark the 68th birthday anniversary of Sheikh Zakzaky, their spiritual leader.

At the gate, the Shiite faithful could be heard chanting and calling for the release of Zakzaky who has been in detention since 2015.

Shiite Leader, El-Zakzaky and wife needs to be flown abroad for better…

In a sudden fit of rage, the Shiites pounced on the Assembly’s gate, forcing their way into the complex. They, however, were stopped from getting into the chambers after various appeals by leaders of the movement.

Eiye Confraternity Members Arrested After Firing Gunshots At A Wedding