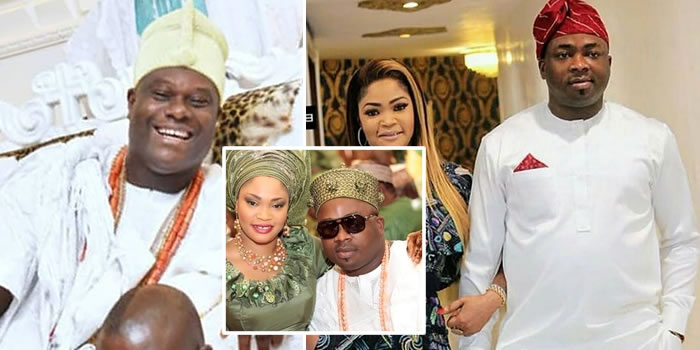 We have learned that the Ooni of Ife, Adeyeye Enitan Ogunwusi saved the Kusenla 11 of Ikate Land, Oba Saheed Ademola Elegushi who would have been engulfed in a major marital crisis as he takes in wife number two.

We earlier report that the young monarch on Friday, May 5, 2019 – picked beautiful Hadiza Tanko as wife number 2.

Insiders disclosed that despite the fact that the young monarch fondly addressed as King Gushi had taken the plot to pick a second wife to the point of inevitable before his first was informed, she threatened ‘’fire and brimstone.’’

Newsmen learned that it took the intervention of the Ooni of Ife, Oba Adeyeye Ogunwusi to cool off Olori Sekinat’s anger and threats and make her accept that her husband taking Hadiza Tanko as wife number is inevitable.

Insiders disclosed that the Ooni – who is a long time family friend of the Elegushi’s – was called in when Olori Sekinat’s anger was spilling overboard.

‘’The Ooni’s intervention helped contained what would have turned out the spillage of royal marriage crisis into the public domain as King Gushi takes another wife today’’ newsmen learned.

Newsmen gathered that before today’s wedding in Kano, Olori Sekinat had successful stalled multiple attempts by her husband to pick wife number 2.

But King Gushi proved a step ahead of his wife by keeping the latest plot well aware from Olori Sekinat until today’s wedding was ”unstoppable”.

Michael Ealy turned down Beyonce for role in her music video