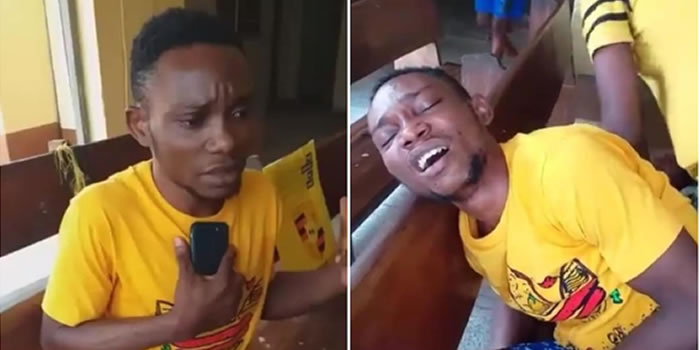 In a video clip, which is now making rounds on the internet, the young man revealed that he was shot at at his home but escaped death as the bullet hit his iPhone 8

A yet-to-be identified man is fighting for his life after he was reportedly shot at by Special Anti-Robbery Squad (SARS) officers in his home.

The young man who is currently in pains due to the bullet lodged in his leg stated that his building was more or less attacked by the officers.

The man also disclose that the SARS officers tried to bribe him into keeping quiet about the incident that left him with a bullet in his leg.

While expressing disappointment in an institution that is designed to help keep citizens safe, he revealed that he was at home when the SARS operatives stormed his home and started shooting sporadically and two of the bullets hit him but one got blocked by his iPhone 8.

The second bullet hit his leg which landed him at the hospital. According to the injured man, he was visited at the hospital by the officers who tried bribing him into silence. He stated that they pleaded with him to not release their identity or share the information with anyone.

Reports state that the SARS operatives stormed the house after they got a tip-off that a man in the building has guns.