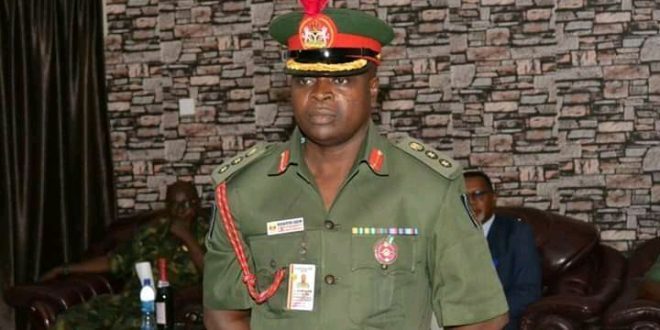 The appointment of Brig Gen. Shuaibu Ibrahim, a renowned military scholar and administrator of repute as the Director-General of the National Youth Service Corps (NYSC) penultimate week by President Muhammadu Buhari has come with a lot of expectations and hope for revitalized national service scheme.

By Deji Oke On May 10, 2019
Source David Onmeje
Share FacebookTwitterWhatsAppReddItPinterestEmailLinkedin

Certainly, it is clear to all Nigerians that the NYSC is yet to fully explore its mandate and or, its impact felt appreciably on Nigeria’s national life in tandem with the spirit and mandate of its establishment.

Youths are the fulcrum of a sound society and where development eludes youths, it poses present and future danger. And those who have meticulously decoded the focus of the administration of President Buhari would concede that the years of massive youth disempowerment in the country, unemployment and underemployment have been his main mania from the outset.

A neglected and abandoned youth has remained a serious national malaise. And the problem is compounded by the growing strength of employable youths, but collapsed companies and the glaring impossibility that government alone cannot absorb this huge number into its workforce.

It is the conviction of Mr. President to see a Nigerian youth population that is self-dependent and self-reliant as well as active contributors to national productivity and growth. And the National Youth Service Corps (NYSC) offers a veritable platform for the attainment of these national aspirations and goals.

President Buhari knows that a huge and frightening idle youth population is a recipe for the widespread and assaulting criminalities in Nigeria. It ranges from insurgencies, insurrections, armed robbery, kidnapping, banditry, militancy, communal skirmishes, entrenched and pervasive cultism, prostitution and a myriad of other social vices. Idle and redundant youths provide a rich reservoir of foot soldiers for the lords of these anti-human and anti-social acts and misconducts.

Buhari’s launch of the Social Investments Programme (SIP) schemes and his administration’s unyielding focus in the promotion of agricultural enterprises and the resuscitation of some collapsed industries are policies and actions packaged to reduce the massive youth unemployment.

In the NYSC scheme, Mr. President sees another flank of his vision of securing the future of young Nigerians through gainful ventures to take them off the streets or insulated from crisis entrepreneurs who recruit them as merchants of violence, deaths and arson for peanuts. Therefore the introduction of the mandatory Skills Acquisition Entrepreneurship Development (SAED) in NYSC for serving corps members across the country was propelled by the same motivation.

Though, these initiatives and programmes are beginning to impact positively on youth engagements in the country, but the results are far from President Buhari’s expectations. And added to the existing problems, ethnic, religious, and regional sentiments or animosities seemed to have deepened in contemporary Nigeria, than wane. The prevalence of divisive tendencies, hate sermons and religious segregation have been amplified in Nigeria, much against the spirit of the nation’s founding fathers and primarily, against the word and letter of the concept of the NYSC.

Nigerians can reminisce that when the military government of Gen. Yakubu Gowon (rtd) established the NYSC with Decree No.24 of May 1973, three years after the end Nigeria’s bitter civil war, it was conceptualized to promote national unity, communality and speedy up, the assimilation of the 3Rs (Reconciliation, Reconstruction and Rehabilitation) in national psyche. Nearly four decades after and with Nigerians more enlightened, these afflictions have taken a stronger stranglehold on Nigeria, especially among the younger generation of Nigerians.

It is clear public institutions like the NYSC are grossly under-utilized in erecting a pool of millions of graduates who would be meaningfully supported to become self-dependent, creators and employers of labour after the mandatory one-year service. Also, Gen. Ibrahim has a presidential mandate to restructure and reposition the NYSC to churn out young Nigerians who would be true ambassadors, champions and crusaders of national unity, and ethno-religious tolerance, as against the present trend of acting as purveyors of these retrogressive proclivities.

Therefore, President Buhari’s appointment of Brig Gen Ibrahim to pilot the affairs of the NYSC was not a surprise or accidental. It came after a thorough in-house search and the impeccable credentials of Gen. Ibrahim and previous stint with the scheme placed him topmost among competing contenders and his eventual emergence.

The NYSC’s new Director-General has an uphill task. The Buhari Presidency expects him to immediately embark on a total overhaul of the system to place it on a pedestal that would truly fulfil its mandate focus and manifest in the attitudinal change of graduates in productivity and perception of the concept of national unity and tolerance. The anticipated reforms and innovations are expected to deepen inter-tribal and inter-religious mix among young Nigerians.

Gen. Ibrahim must discourage the trend of parents who lobby for their children to be posted back to their states of origin or specific establishments. It demeans the essence of the scheme and deprives these generation of Nigerians the rare opportunity to taste and feel the impact of the country’s diversities.

Furthermore, the new NYSC Director-General would have to explore ways to make the Skills Acquisition Entrepreneurship Development (SAED) more visible, lucrative and beneficial to participating Nigerians after the post-service year. Currently, only few of the beneficiaries of the skills acquisition training are persuaded to put it into practice, even with start-up packs extended to deserving participants.

It is the responsibility of the NYSC management to appraise SAED and come up with appropriate recommendations that would make the scheme more effective, productive and beneficial to even youths outside the targeted participants. The requirements of such recommendations for improvement of SAED would either be fused into the Presidency’s subsisting social investments windows or forwarded to it separate consideration.

This will blend with President Buhari’s vision for Nigerian youths. It is a sure path for reducing unemployment, over dependence of white-collar jobs, arrest youth restiveness and most importantly, make every Nigerian an active contributor to the peace, growth and development of Nigeria.

Fakuade and the silent transformation of MTI

Integrity according to Wike’s dictionary

General Buratai and the return of military innovations