Nollywood actor Leye Kuti calls out his colleagues for forgetting Seun Egbegbe and the good he did for most of them. According to Leye Kuti,the film marketer, Seun Egbegbe, he feels it is funny how the people he helped in the movie industry will abandon him and prays that he is enjoys freedom once again.

This he shared wishing Seun Egbegbe a happy birthday.

It’s so funny how people forgot the good you did to them, we were never close but I can pick point you helped a lot of people in that industry and they can not even celebrate you on your birthday it’s so sad… me n u be fighting mate but bcos I know u get good mind I will celebrate you today Hbd @seunegbegbe… I know after they see dis 1 now them go gossip as usual… I pray freedom visit you soon and God will use u for good amen ? am not celebrating is wrong part trust me? but I think he can learn more now and change to be a better person… ( he never do anything for me before I no chop him money ooo) God will touch and make you win souls for God… we have heard about some pastors from bad act to men of God 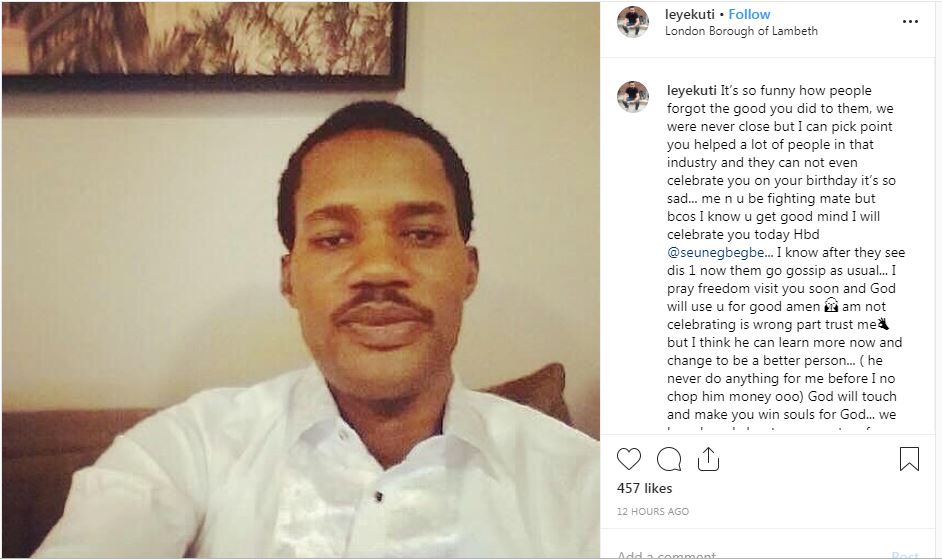 Recall that in 2017, Yoruba filmmaker, Seun Egbegbe, and Oyekan Ayomide, were arrested for allegedly defrauding some Bureau De Change operatives of over N40 million, between 2016 and February 2017.

The film maker is known as a controversial figure in the Yoruba film industry. He was caught allegedly attempting to defraud a bureau de change operator of $9,000 and £3,000 (about N4 million) on February 2.

The event occurred at the Gbagada General Hospital in Lagos. The accused allegedly disguised as the Managing Director of Gbagada general hospital while his accomplice, a certain Mr. Ayomide, came disguised as a patient.

The incident marked the fourth time Mr. Egbegbe would be embroiled in a theft mess.