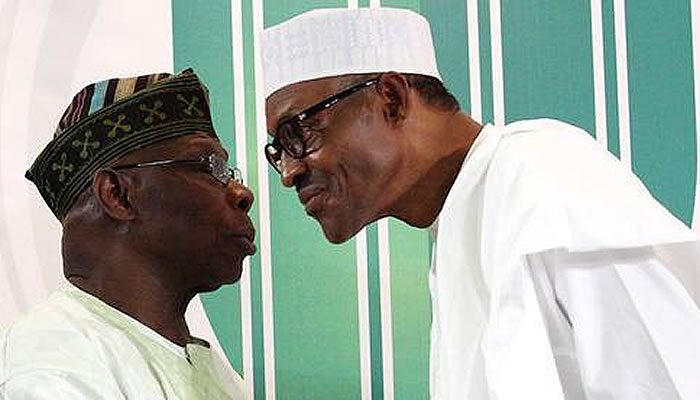 President Muhammadu Buhari has spoken on the absence of former President Olusegun Obasanjo at the June 12 Democracy Day celebrations.

Chief Olusegun Obasanjo, former President Goodluck Jonathan, General Gowon, Babangida, among others were not present at the event

Obasanjo, however, claimed that he was not invited for the national event.

However, in a statement  on Wednesday by his Senior Special Adviser on Media and Publicity, Garba Shehu, Buhari said Obasanjo owes Nigerians explanation on why he did not attend the programme.

He said, “The former President, Chief Olusegun Obasanjo, owes an answer to Nigerians on his absence from the 2019 Presidential inauguration and Democracy Day celebration because the claim that he was not invited or he did not receive an invitation cannot be sustained.

“Since the claim was first made, elements in the polity that have deliberately and consistently been trying to lead the country toward polarization have cashed in on it, throwing all manner of rubbish at the Buhari Presidency.

“The fact remains that the Secretary to the Government, Boss Mustapha wrote on May 16th, 2019 to:

“The invitation was sent to Chief Obasanjo’s known forwarding address, detailing out all the major events, and the invitation cards were delivered by a reputable courier company as confirmed.

“The receipt of the letter and invitation cards as delivered by the courier company was confirmed by Mr. Taiwo Ojo, the long-standing Personal Secretary to the former President.

“If in the circumstance, Chief Obasanjo did not see or receive the letter and invitation cards as published by Vanguard newspaper (Page 16, June 16, 2019) and several other news platforms, then the former President needs to find out what is happening with his own secretariat.

COVID-19: Presidency mocks Soyinka over comments on lockdown, says he is fiction…

Coronavirus: Ajimobi has not replaced Abba Kyari as Buhari’s CoS, says…

COVID-19: Presidency Reacts To Rumours That Buhari, Kyari Have Been Flown Out Of…