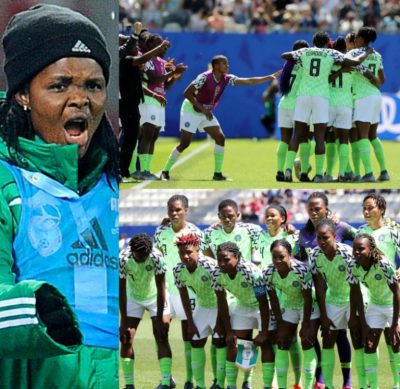 In 2011 when Germany hosted the tournament, Simone Laudehr scored on 54th minute as the hosts ran away with a 1-0 win against Super Falcons in a matchday-2 Group A tie in Bochum.

Eucharia who was the Super Falcons coach at the time, felt short-changed, claiming Simons’s goal was controversial and so should not have stood.

Now, after going through to the knockout stage of the 2019 edition of the global tournament for women on the back of emerging as one of the four best third-placed teams in the group stage, Super Falcons who are reaching this stage for the first time in 20 years, will need to overcome Germany today to reach the quarter-finals.

And Eucharia believes the African queens can do it, stressing that Germany are not unbeatable.

“First, I believe that Super Falcons can do much better than they did in 2011 in Germany against this same German team,” Eucharia told Completesports.com.

“Back then in 2011, we (Falcons) lost the group match to the Germans’ controversial goal.

“But now, its a completely different ball game, in a different stage, and I believe that the Germans are beatable.”

Eucharia further posits that having reached this knockout stage, Super Falcons have grown in confidence to match their experience.

“The girls’ confidence has come up having made it to this stag, and of course, the next target would be to advance to the quarter-finals,” the Super Falcons’ 2010 Women’s AFCON-winning coach who is now coach of Heartland Queens of Owerri remarked.