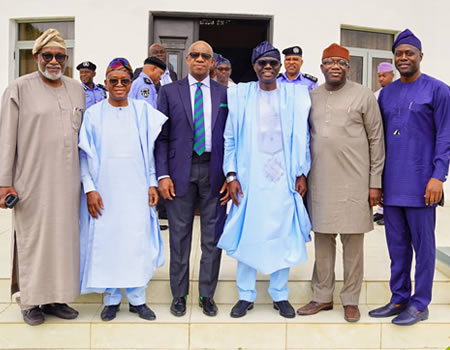 The governors of the six states in the South West Zone met on Tuesday in Ibadan at a security summit where they pledged to find a solution to the lingering security challenges in the zone.

The summit, which focused on Western Nigeria, was organised by the Development Agenda for Western Nigeria (DAWN) in collaboration with the six governors.

In his address of welcome, Makinde argued that a regional approach to resolving the security challenges facing the South West states was important.

He said some states were close to international borders, increasing the threat that the zone was collectively facing.

The governor described the problem of insecurity in the zone as ” a snake on the roof and we cannot ignore it and go to sleep.”

Makinde decried the rising spate of kidnappings and the growing tension between farmers and herdsmen in the zone.

He was, however, optimistic that deliberations at the summit would ”throw up tailor-made solutions that can be applied to the states of the South West.”

”As a group on this side of the Niger, we have always had more things that unite us than those that divide us.

”We have always held our doors open and been welcoming of strangers and want things to continue like this because the diversity in our states is an ingredient for economic development.

”We shall not allow the actions of miscreants and enemies of unity to make us change who we are.

”As governors, it is our responsibility to ensure that everyone in our midst, indigene or alien, is assured of the security of life and property.

”We know that there are barriers preventing us from carrying out this constitutional responsibility to the fullest measure.

”One of those barriers is the fact that we do not control the security apparatuses in our states.

”It is my belief that at the end of our deliberations, we would have come up with arguments that we are in support of state police,” Makinde stated.

In his keynote address, Gov Rotimi Akeredolu of Ondo State noted that insecurity had become a major issue in the polity.

Akeredolu, who is the chairman of the South West Governors Forum, said that the security of life and property of citizens should not be compromised.

He urged other governors in the zone to be proactive in tackling the current security issues, saying
adoption of a scientific approach would bear far-reaching effects.

He urged the governors in the zone to ensure that their strategies were harmonised to achieve a common purpose, stressing that the respective states could not work in isolation.

”We must cast aside all partisan considerations in the interest of our people.

”Our ultimate aim must be the socio-economic integration of the region which reflects our collective aspirations for a peaceful and prosperous environment,” he said.

Gov. Kayode Fayemi of Ekiti in his remarks said that the advocacy for state police was not in opposition to federal police.

Fayemi, who is also the chairman of Nigeria Governors Forum, said there was the need for state police to complement the work of the federal police.

He noted that the security challenges were not peculiar to the zone alone but a national problem.

Gov Adegboyega Oyetola of Osun, Babajide Sanwo-Olu of Lagos State and Mr Dapo Abiodun of Ogun said the summit was a call to duty for the governors to secure the region.

The trio said that the priority of the governors was to make every nook and cranny of the region safe for its people.

The governors assured the people of the zone that the issue of insecurity would soon be tackled.

He said: ”We are now more conscious of the imperative of collaboration, the indispensability of common front to fight our common enemies who make lives miserable by their nefarious activities.

”Governors are central and their enviable roles pivotal to security of their states, the people are also cardinal in the overall security architecture.

” This is why everyone who desires peace and adequate protection must establish with the police and other relevant security agencies a symbiotic relationship that will foster or engender the much-desired peace and tranquillity in our various communities,” he said.

Lakanu gave an assurance that the police had put in place frameworks that would facilitate the strengthening of Operation Puff Adder and ensure the sustenance of its gains.

”These include plans directed at re-organising and re-launching the safer highway and Safer City Models of Policing which will entail the acquisition of a new fleet of vehicles that will be deployed to dominate the public space as well as the emplacement of CCTV’, ” he said.

Give us a new Dubai in Nigeria, citizens urge Gov Sanwo-Olu as they hold unity of purpose rally for reconciliation, peace