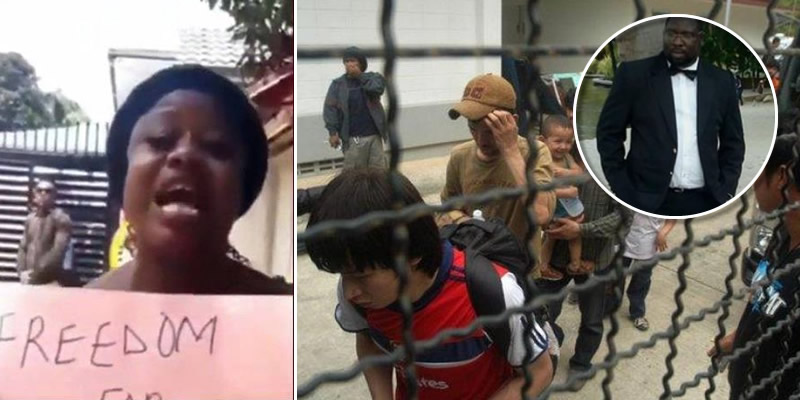 We earlier reported that Nigerians storm Nigerian Embassy in Malaysia to protest after Thomas Ewansiha, a Nigerian student at the Limkokwing University of Creative Technology in Selangor, Malaysia, died in the custody of immigration authorities.

The director-general of the Malaysian immigration, Khairul Daud has confirmed the death of Thomas Ewansiha in a statement on Friday.

According to him the deceased was among 20 foreigners picked up during a raid at Desa Aman Puri in Kuala Lumpur, capital of Malaysia, on July 4 .

Ewansiha, who was pursuing a doctorate degree in management at the private university, was said to be married with two children.

His death angered other Nigerians residing in Malaysia and some groups of Nigerians troop to the Nigerian High Commission (Embassy) in Malaysia to protest the young man’s demise. See video from the protest below.

Immigration officers had stormed apartments in Desa Aman Puri following public complaints regarding the alleged influx of Africans in the area.

Daud said several Africans, including the deceased, had attempted to flee and refused to cooperate with the officers who were conducting checks during the raid.

“The subject also fled but was successfully arrested by operation officers, the subject then presented his passport and checks showed that subject had a student pass that was still valid,” he said.

“The subject’s action in fleeing had raised doubts about the authenticity of the student pass that was owned by the subject.”

It was learnt that Ewansiha was detained for 14 days at the Bukit Jalil depot for the officers to “verify the authenticity of his student passport”.

He said all the detainees were treated well and according to standard operating procedures.

“During the documentation process, the subject was given basic treatment by the civil defence department Malaysia as there were old wounds on the right calf of the subject and the subject had informed that he was not suffering any illness,” he said.

“At the time of incident around 12.05 midnight July 9, 2019, the officer on duty was informed by other detainees that the subject suddenly had a seizure while sleeping.”

He said the special treatment unit that was on duty had immediately carried out checks and treatment on Ewansiha, and that the Hospital Universiti Kebangsaan Malaysia (HUKM) was contacted for immediate assistance when he fell ill.

According to him, the HUKM ambulance arrived together with an assistant medical officer at 12.30am and had continued to carry out checks and provided medical aid, but Ewansiha was later pronounced dead.

He said the supervising officer and the officer on duty then went to the Bukit Jalil police station to lodge a report.

“The Immigration is currently still waiting for the full medical report on the subject and the full autopsy report to identify the cause of death,” he said.