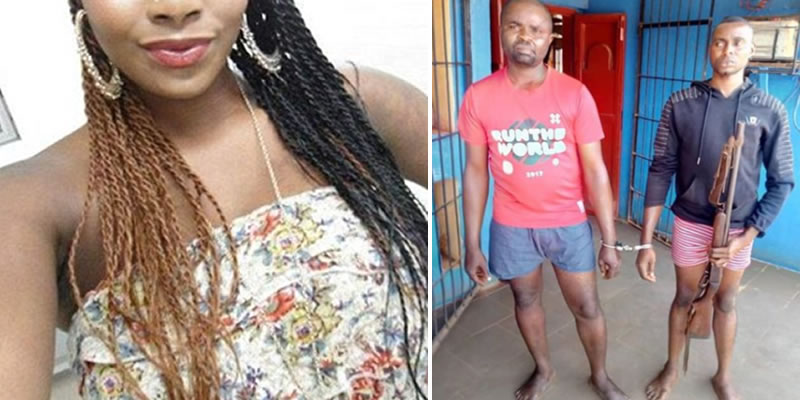 Two suspects linked to the murder of 24-year-old Chinedu Okoye, have been arrested by the Anambra State Police Command.

A 24-year old man, Chinedu Okoye was on Friday killed by two men over girlfriend in Umuru village, Ogidi in the Idemili North local government area of Anambra State.

The prime suspect, Dubem Okeke (28)was said to be interested in the girl, one Ifenyichukwu Kamsisichukwu, whom the deceased was also in love with.

When Dubem learnt that the deceased was in Kamsi’s house, he went there in the company of Okechukwu.

The two suspects, 28-year-old Dabem Okekem and 37-year-old Okechukwu Okafor had barged into the house of one Ifenyichukwu Kamsisichukwu in Ogidi Aniuku village, where they forced her to open the door and took Okoye away.

Dabem, the principal suspect that pulled the trigger, had reportedly been having heated confrontations with the deceased over Ifenyichukwu before the murder incident occurred.

The Police spokesperson, Haruna Mohammed confirmed the incident, saying the suspects were arrested by police detectives attached to Ogidi Division.

He said one single barrel gun allegedly used in perpetrating the crime was recovered from them.

He said, “The suspects stormed the house of one Ifenyichukwu Kamsisichukwu, 20, forced her to open her door and took away her boyfriend, one Chinedu Okoye, 24 years of Umuru Village Ogidi and shot him with a gun.

“Scene was visited and the victim, who sustained a gunshot injury on the back was rushed to Twinkle Hospital, Ogidi for medical attention.

“He was certified dead by a medical doctor while receiving treatment.”

Mohammed said the corpse had been deposited at iyienu hospital morgue Ogidi for autopsy, adding that the case was being investigated.