BBNaija: Fans Come After Gedoni As He Confesses How He Feels About Kimoprah

Being in love with a guy who seems to be in love with his ex or dating a guy who seems to have a rather soft spot for his ex is courting trouble. If you’re troubled by the quicksand of sappy emotions your man has for his ex-flame, you’re not alone. Really now, if he’s still in love with his ex, what the heck is he doing with you? It seems that a diary session from the 2019 Big Brother Naija reality show is causing a big ruckus of social media after something unbelievable happened.

Diary sessions in the Big Brother House are confidential and between Biggie and the housemates. During Gedoni’s diary session with Biggie on Day 20, he confessed to missing Kimoprah and would love to have her back in the House.

Gedoni misses KimOprah the most and would love to have her back in the House. We wonder how Khafi would take this News.#BBNaijahttps://t.co/UEGYFjNZYG pic.twitter.com/EBJL8EcKK8

American singer, John Legend congratulates Gedoni and Khafi on their…

Getting over an ex is never easy. While it’s not easy to forget someone you once loved, there’s a thin line between forgetting someone and staying in love with them. If a boyfriend still loves his ex, chances are, he still wants to get back with his ex. And that is definitely not something any lady, not even Khafi should put up with.

Wondering how Khafi would take this news? Well, some fans of the show who heard what Gedoni said were pissed at him and they concluded that he was only playing with Khafi and she would only end up being hurt. Here are some comments gathered:

“It’s the game for the twist, you don’t go to that house to pour out your feelings, just play the game always. Sorry for Khafi though, the past will always have a replay some how.”

“That is what a woman will never learn quick, don’t be too quick to open up, lately in this world them no dey write quiet person or good person for face. Like she’s always saying, his calm, his a gentle guy, dose it make him really really that?” 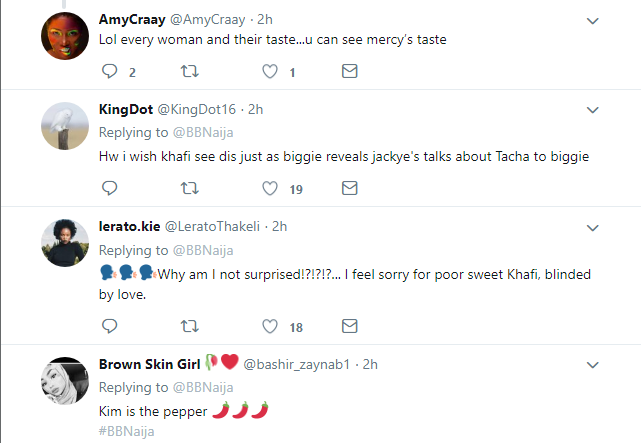 “Chaiii I wish anyone could reach out to Khafi via SMS or phone call to let her know that she’s on her own o hmmm. She better face d game wey she come play and leave Gedoni aka Ronaldo , cos he’s still interested in his ex Kimoprah!!”

“Sometimes I don’t understand Gedoni’s relationship with Khafi. If he’s up for eviction, I don’t think I will love to share my 100 votes, all might go for Khafi.” 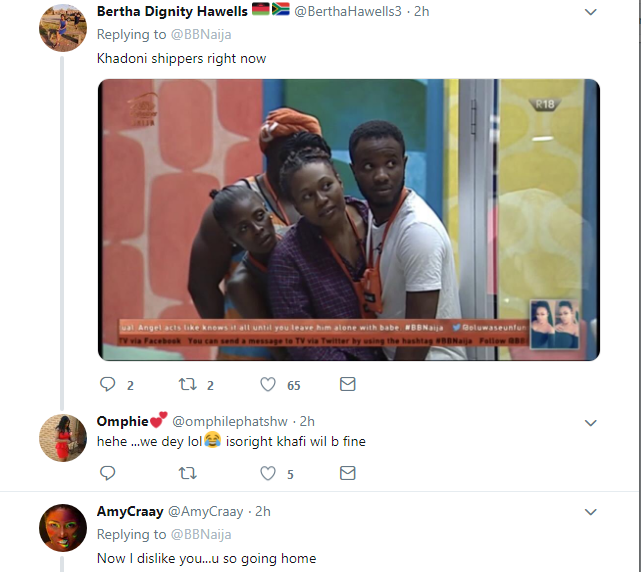 “Gedoni is looking more like a f#k boy with every passing day in the house. Not sure he really likes Khafi. Might just want to use her to get votes from her fanbase when he’s up for eviction. Khafi is a beautiful soul and doesn’t deserve this.”

“Well dude don’t really like Khafi the way she does.. Khafi is looking beyond the house while local man is not worried.” 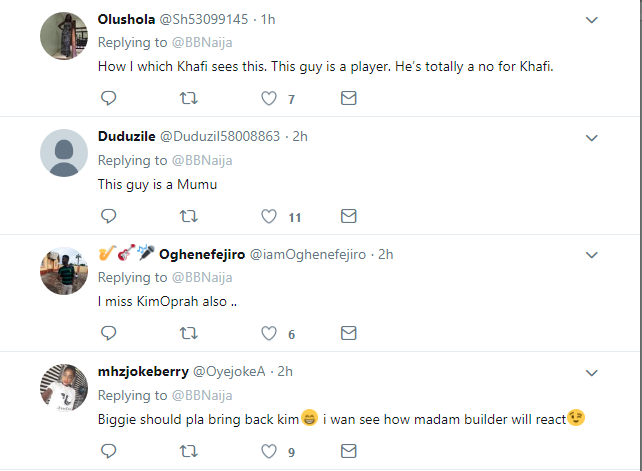 Like IPOB, is IMN the new pet project against Nigeria?