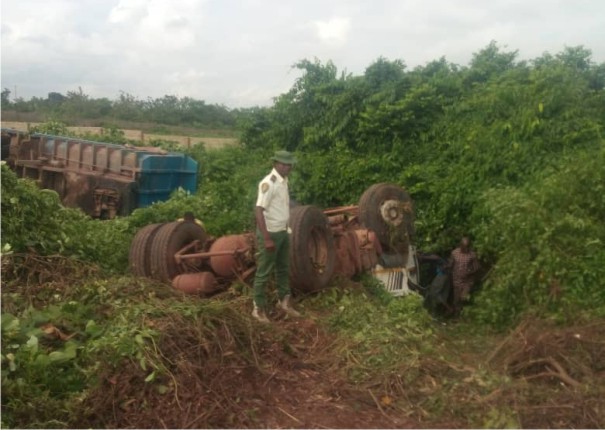 Newsmen gathered that the accident occurred when the driver of an Iveco truck , with number plate AAA 912 XK, reportedly lost control of the vehicle .

According to an eyewitness, the container detached from the truck and crushed three people to death after it veered off the road into the bush .

The spokesperson for the Ogun State Traffic Compliance and Enforcement Corps , Babatunde Akinbiyi, confirmed the accident in a statement made available to journalists in Abeokuta .

Akinbiyi said the truck was on top speed when the driver lost control and the vehicle ’ s body detached from the head as a result of not being properly latched .

He added that among the victims was the driver of the truck .

Akinbiyi explained that the vehicle had been evacuated to the Ewekoro Divisional Police Station , while the victims ’ corpses had been deposited in the Ifo General Hospital morgue .

He stated that two other victims , who sustained injuries , had been taken to the State Hospital , Ifo, for medical attention .

He said , “ The truck was on top speed when the driver he suddenly lost control and the body of the vehicle detached from the head as a result of not being properly latched , and it veered into the bush .

“ Among the three confirmed dead victims was the driver of the truck .

“ The vehicle involved in the accident has been evacuated to the Ewekoro Divisional Police Station, while the dead victims ’ bodies have been deposited in the Ifo General Hospital morgue .”