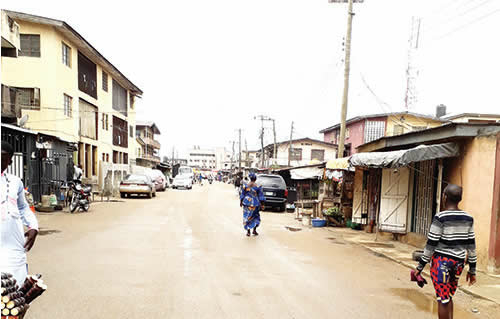 Many fear death as fresh violent clashes broke out in Oworonshoki and Gbagada areas of Lagos state between two rival cult groups – Aye and Eiye confraternities.

According to Punch METRO reports, we learnt that the renewed hostilities began last Sunday evening and lingered until Wednesday, claiming four lives.

A trader at Fogo Junction, Iyana Owonroshoki, identified only as Iya Igbo, was said to be one of the victims. She was reportedly hacked to death by cult members who exploited the fights to rob innocent people.

City Round learnt that some cult members had trailed a member of their rival gang to a bar at Kiniun Ifa Junction in the Sawmill area of Gbagada, around 6 pm on Sunday and shot him dead.

Three hours later, a gang believed to be on a revenge mission, unleashed terror on Fogo Junction during which the Igbo trader and another woman selling slippers, were attacked with cutlasses. The latter reportedly escaped with injuries.

The women had reportedly resisted the hoodlums who wanted to dispossess them of their money and phones.

Our correspondent gathered that on Monday, some suspected cult members shot dead a barber, one Olorunwa (aka Injection), in his shop on Oyegunle Street, Oworonshoki.

The clashes were said to have disrupted commercial activities in the areas and caused panic.

Olorunwa’s shop was locked on Thursday when our correspondent visited the street.

A shop owner, who spoke on condition of anonymity for security reasons, told City Roundthat the assailants rode on a motorcycle.

She added, “They shot the barber and fled immediately. He died on the spot. It was policemen from the Alonge division who came to pick his corpse. On Wednesday, we have to close shops quickly when the cult boys started chasing one another again.”

A community leader, Mr Agboola Bakare, said lives had become worthless to the hoodlums, noting that their violent activities had denied people of peace in the neighbourhood.

Bakare, who also confirmed the barber’s murder, said there had been calm in Oworonshoki for some time, until a week ago when the “uprising” began.

He urged the police to intensify patrols in the neighbourhood.

He said, “We live in fear every moment; the fear of children in the age group of our grandchildren. We understand some of them are in secret societies. We don’t know who to trust and discuss this issue with. The fear is that the elders you want to discuss it with may have their children in those circles.

“We don’t move freely again, especially when night falls. We meet with the police from time to time to find solutions to the problem. Maybe prayers will be the ultimate solution to the horror we find ourselves in. Some people blame it on joblessness. But are children in secondary schools qualified to take up appointments? Some of them are involved in this crime.”

A resident of Kiniun Ifa Street, who spoke on condition of anonymity, explained that the area had become so charged that people now stayed indoors as early as 8 pm.

He said it took a combined team of policemen from Ifako and Bariga divisions to disperse the rampaging gangs on Sunday evening.

“Many traders now close their shops once it is 7 pm to avoid being caught up in the violence. A man was killed on Sunday in front of a beer parlour. I also learnt that they (cult members) killed a rival group member in Odo Eran, Oworonshoki,” he added.

The Chairman, Kiniun Ifa Residents’ Forum, Mr Jagun Adebowale, urged the police to beef up security in the area.

He lamented that most times, the hoodlums would have caused huge damage before police arrived the scene.

“The atmosphere is not friendly. What we have is graveyard peace. People ply their trade in panic,” the chairman added.

At Fogo Junction, some plain-cloth policemen were seen searching some men suspected to be cult members. They arrested a man and took him away in a Sienna car.

The Chairman, Somolu Central Taxi Park, beside Fogo Junction, Mr Ade Emmanuel, said he lost his phone while running to safety during the Wednesday clash.

He stated that the hoodlums injured the slippers seller on the shoulder while she was dragging her bag with them.

He said, “On Sunday around 9 pm, there was outage. We suddenly saw those boys with cutlasses and they were shooting indiscriminately. They attacked an Igbo woman in her shop and collected money from her. The woman later died from injuries she sustained. They also injured another woman selling slippers.’’

The chairman expressed worry over the late response of the police to distress calls.

He said, “Most times, it is after they leave that police will come. And if some of them are arrested, they will be released some days after. We used to leave the park at 10 pm, but now we close at 7 pm.”

“We have restored normalcy to the communities and launched a manhunt for the fleeing suspects,” he added.
Share on FacebookShare on Twitter
Got News Tip? Send Us Story !
Follow Us on Google News