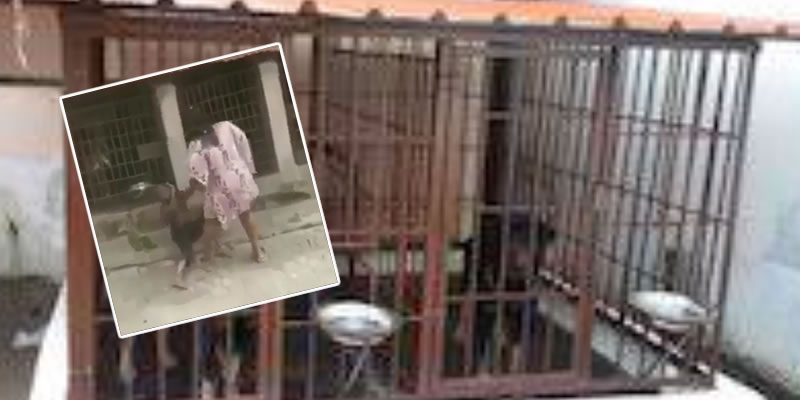 A viral video of a young woman brutalizing and caging a young boy has caused outrage online.

Angry reactions has trailed a video of a young lady who was recorded beating a boy with a Leather belt before she finally locked him up in a dog cage inside the compound of a building in Nsukka.

In the viral video, the lady was heard saying: I’m not joking with you, you think you have power! before she finally locked him up in the cage and instructed him to be silence henceforth.

Watch the viral video below.

The video which cause outrage after it went viral on social media made Nigerians to seek for the location of the incident. One of the Nigerians who were desperate to bring the suspect to book was a Popular OAP, Dotun.

Dotun offered N100,00 to anyone who can locate the wicked young lady.

According to reports, the lady has been arrested and the young boy was set free after 3 days.

Below are some angry reactions

@ikogbonna: She needs to be arrested and pay that boys family compensation of some sort

@street_rules77: If you see nothing wrong with this then you have a problem with your brain…..

@iamaprilvictor: Please can we locate her and punish her… Our children are psychologically abused everyday… Trust me I’m a victim of such barbarism… I still suffer the stigma up until today

@yaronmallaam: He will grow and get rid of her, thats exactly what i experienced….😭😭😭

Former BBNaija Housemates Teddy A And Bam Bam Are Engaged

After weeks in hideouts, bandits release 55-year-old woman and two others in Sokoto