Popular On-Air Personality, Daddy Freeze, has shared the savage response he gave a follower who asked him for N800 to buy kerosene in order to cook.

According to the screenshot of the conversation which was made public by the OAP, he told the follower to use firewood instead.

He explained that his decision to slam the user is because he has zero tolerance for online begging.

What he wrote below:

Zero tolerance for online begging.
–
If you have a valid, verifiable issue, the #FreeNation charity department will sort it out after a painstaking accreditation process!
–
We have been scammed several times, with our love and generosity taken for granted.
–
One of such occasions was when we raised 800k for a very sick woman through a family member and only 80k got to the sick woman.
–
The rest went into plasma tvs, DSTV, new accommodation and pizza for family members.
–
Once bitten twice shy! ~FRZ 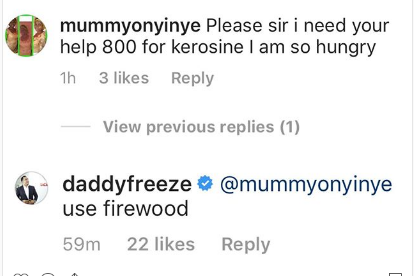