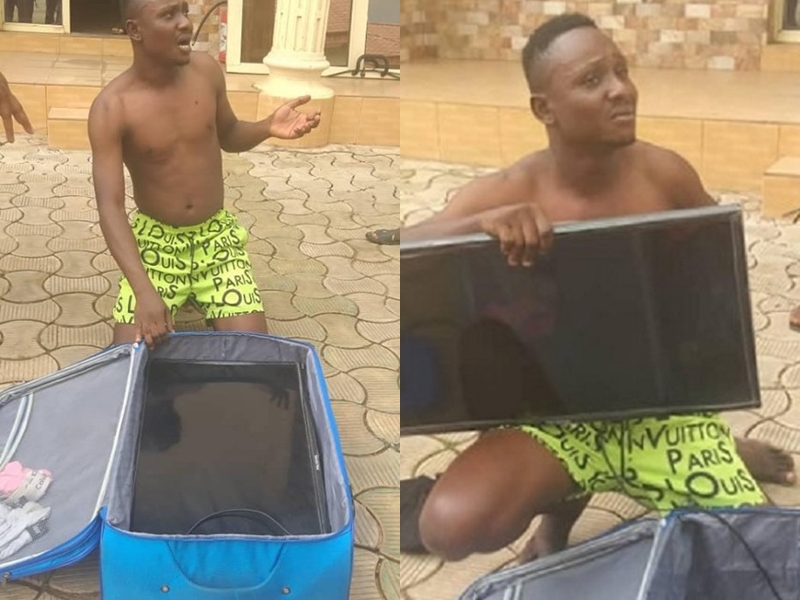 A man has been nabbed after he tried to steal a plasma TV from a hotel in Makurdi, Benue State.

The suspect was caught with the Plasma TV placed in a trolley bag after the hotel’s security insisted on running a check.

A Facebook user, Vera Iyo who shared the story with photos, wrote ;

This guy came to kyabiz hotel mkd, Gboko road to steal this plasma TV but unfortunately we caught him.this should be a warning to other hotels, this ppl are not joking oooo. While he was caught he had keys to order hotel rooms, should incase you have a missing Tv in your hotel check E division.

Thief caught in hotel lodging with girlfriend after withdrawing over…

If you recall, A lady was also apprehended and paraded after stealing the Plasma TV belonging to Kevleyn Hotel in Delta State.

The lady identified as Laurenta, conspired with her boyfriend to commit the said act after lodging in the hotel for one week.

‘Dating A Stingy Man Is Like A Disease, Stay Away’, Toke Makinwa Warns

VIDEO: Benue University Student slaps man who proposed to her in lecture hall