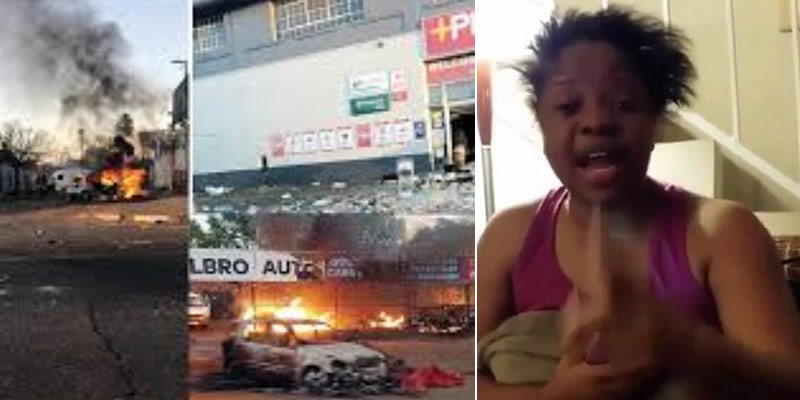 The ongoing xenophobia attacks in South Africa is generating more outcries as the RSA government is yet to curb the fierce situation.

Several videos emerged earlier showing damages that Nigerians and other foreigners  have incurred in the ongoing attacks. The attacks have escalated beyond property destruction to killing of foreigners and a video of a man recently burnt alive is currently making rounds on social media.

A Nigerian woman has been made emotional after watching a video that shows South Africans burning a Storey building housing foreigners, the victims inside were forced to jump off the building and some of the foreigners who manged to escape were also set ablaze.

In a viral video, the yet to be identified woman broke down in tears as she calls out President Muhammadu Buhari and his vice, Pastor Osinbajo, lambasting them on how they are handling the situation without priority. Watch the video below.

Meanwhile, the Nigeria government has condemned the ongoing attacks on its citizen in South Africa and promised to take safety measures. This was contained in a tweet from the official and verified twitter handle of the Nigerian Government, @NigeriaGov yesterday, September 2, 2019.

The continuing attacks on Nigerian nationals and businesses in South Africa are unacceptable. Enough is enough. Nigeria will take definitive measures to ensure safety and protection of her citizens. (1/2)

In what appears to be a swift action to the government’s tweet, the Minister of Foreign Affairs, Geoffrey Onyeama, has summoned the South African High Commissioner to Nigeria, Bobby Moroe, over the xenophobic attacks on Nigerians in South Africa.