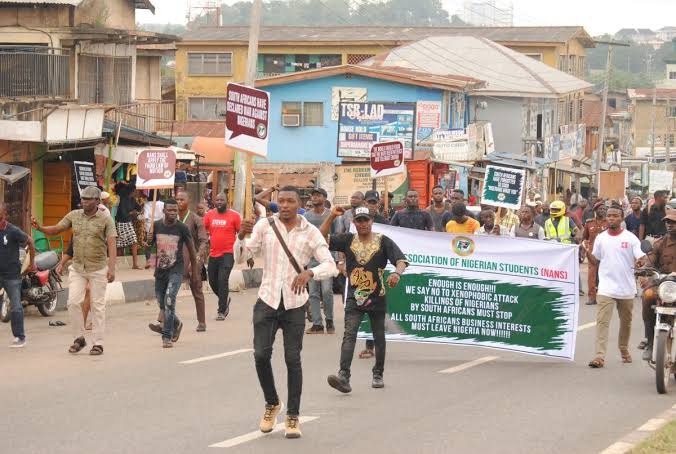 Following the attacks on Nigerians and their businesses in South Africa, the National Association of Nigerian Students (NANS) Thursday held a peaceful protest in Ado Ekiti, the Ekiti State capital, calling on President Muhammadu Buhari to stop the senseless carnage with immediate effect.

The protest was done in conjunction with the National Coalition for Yoruba Youth and Students.

The students protested from Ijigbo area of the state capital to the popular Fajuyi Park, which hindered free flow of traffic along the Ijigbo- Basiri highway for over an hour.

The students carried placards of various inscriptions abusing the South African government over the persistent xenophobic attacks on Nigerians.

The leaders of the protesters, Sunday Ashefon and Ojo Raymond, who addressed the crowd, said the protest was to warn South Africans to halt their barbaric act and to show that Nigerian students would not tolerate the violence against Nigerians living in South Africa.

Raymond, who is the Vice-Chairman of NANS/JCC Ekiti zone, expressed concern over the killings of Nigerians, while urging Nigerians to stop patronising MTN, DSTV, Stanbic IBTC and other investments owned by South Africans.

He advised Nigerian consumers to move over to alternative network providers in the country.

“You can’t be killing Nigerians and be expecting patronage for their businesses. Nigerians remain the major consumers of South African companies’ products. Is this the best way to pay us back?” he asked.

The President of the National Coalition of Yoruba Youth and Students, Ashefon, called for the immediate release of the 36 persons arrested during similar anti-xenophobic protests in Lagos.

He said that the trend was unacceptable to the youths in Nigeria, adding that the South African police did not deem it fit to curb the menace which he said signposted compromise and tacit support for crimes.

The youth leader, who condemned in strong terms the attack on Nigerians and their businesses in South Africa, also gave a seven-day ultimatum to the federal government to stop the carnage, failing which the students’ body may result to self help.

He said: “Nigerians in South Africa deserve to be treated with dignity, respect, freedom and mostly be protected from further provocation, looting and killings.

“The protest against xenophobic attacks in South Africa by various organisations across Africa has continued to linger while citizens are expecting the authority to arrest the situation. This is the best they can do under this situation.”