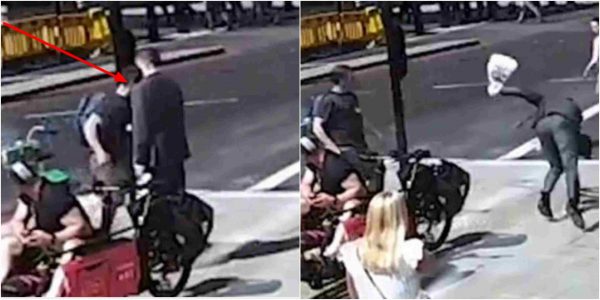 A cyclist who is currently on the run is wanted by the Police after he headbutted a pedestrian and sent him flying to the ground.

According to a report by Metro UK, the cyclist ran a red light in Farringdon Street in the City of London at around 1.45pm on August 22, narrowly avoiding hitting the pedestrian who was crossing the road.

He then got off his bike, came back towards the businessman and headbutted him in the face, calmly cycling away as his victim lay sprawled on the pavement.

The victim, 57, needed stitches to a wound above his eye and suffered ligament damage to his arm. Pc Fisk, from the City of London Police, said:

‘We are asking the public to help us identify this cyclist, whose needlessly violent actions has left a member of the public with some nasty injuries.

‘If anyone has any information about the man who carried out this assault, please contact us. He is described as a white man in his 40s, around 5ft 10ins, of medium build, with short greying hair.’

watch the video below: