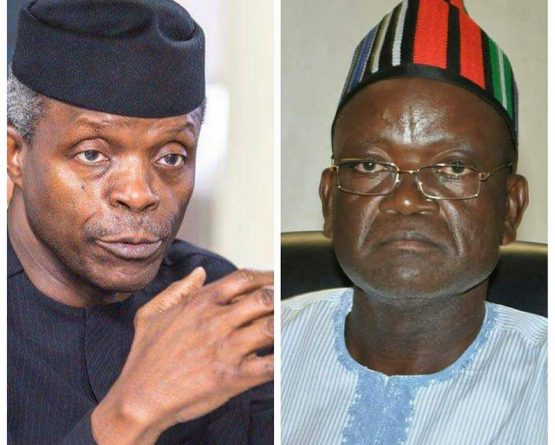 The meeting was attended by the Acting Director General of the National Boundary Commission, Adaji Adamu.

While addressing newsmen at the end of the meeting, Ortom said “We came at the instance of the vice president to discuss the lingering problem between Benue and Ebonyi states in particular between Agila in Benue and Ngbo in Ebonyi.

“We are also here with the acting DG, National boundary commission and we had taken far-reaching decisions to ensure that we demarcate the boundary between these two states so that we can hold our people responsible.

“As it is now its difficult to identify the criminal elements who are creating tension and creating more of these problems.

“So I believe that very soon the boundary commission would be coming out with a program that both Benue and Ebonyi will team up together to provide the necessary logistics and security to ensure that the boundary is demarcated.

“Well, it’s a border crisis because we are talking about two states. We should know the limits of each states. It’s a border problem more like communal problem.” he said

On TIV/Jukun crisis, he said, “Well, I know that there is a spillover. This is largely TIV and Jukum in Taraba. I have Jukun in Benue state. We are not fighting. There were issues in the past and I decided to set up a judicial commission of enquiry which is still sitting to look at the remote and immediate causes of this strife so that we will find a lasting solution to it.

“This other one is more of a problem in Taraba but because there are TIV people in Benue and we are talking about TIV people so each time people are displaying some run back to Benue so that’s the spirit of it.

“But I think that the governor of Taraba state is doing well. Recently they met and they agreed that there should be ceasefire even though I saw in the press that there were some issues with that peace agreement but you know each time there are efforts to try to solve problems, criminal elements will come in and I think that the steps that the governor took by inviting two sides, both the TIV and the Jukum to sit together and find means of how they can resolve this matter is the best approach.

“And I believe that once that problem is sorted out in Taraba state, we will not have anything in Benue state.” he concluded.