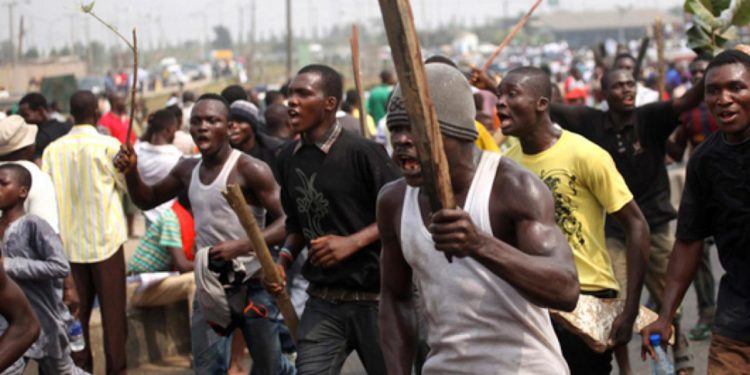 Tension in Warri South Council Area of Delta State as a yet-to recognised man has been reportedly shot during a fight between youths of Okere-Urhobo kingdom and neighbouring Itsekiri extractions at Okere Market.

WITHIN NIGERIA learnt that the incident occured on Sunday morning and landed the victim in an undisclosed hospital.

Traders, buyers and businessmen absconded the market during her attack as youths of each group exchange gunshots and there were reports that they took advantage of the incident and loot abandoned shops.

The demise of HRM (Prof.) Oghenero Okumagba Idama II and the decision of the Okere-Urhobo party that no shop should be opened in respect of the final rites of the deceased monarch caused this unrest as it reportedly led to gun battle between the group and it’s Itsekiri counterparts.

According to reports, (name withheld), youths of Okere-Urhobo extraction had gone to Obahor, a predominantly Itsekiri area, as well as the market to enforce the order.

They were reportedly rebuffed by the other party, who stated that commercial shops cannot be shutdown in their domain, as there was no such order compelling people to do so during the burial ceremony of the late Olu of Warri, HRM Ogiame Atuwatse II.

This disagreements resulted into a fight where guns and other weapons were displayed by both groups.

While reacting to the development, the Delta State Police Command confirmed the incident and the state commissioner of police clearly stated that only one person was shot and hospitalised not six.

Mr Adeyinka Adeleke further said: Another person was shot and hospitalised yesterday (Saturday). They’re fighting because of the burial of the King.”