The richest man in Africa, Aliko Dangote responded in an interview to Shatta Bandle, popular Ghanaian musician who claims to be richer than him. Since then, reactions have been coming from everywhere. Teasing and reproach are not lacking in the sauce.

But you have to rely on the dreaded Nigerian businessman to set the record straight.

“I can not compare myself to anyone in terms of wealth. If anyone claims that he is rich than me, I do not see any harm in that. I’m not competing with anyone, “Mr. Dangote said, saying the most important thing is” I have my things and I’m happy with what I have. ” I have nothing to prove to anyone. I never looked at me. I have been recognized for the work I have done. “

In a video posted on social networks, Shatta Bandle, a Ghanaian said to be richer than Aliko Dangote.

“Dangote is my kid when it comes to money,” said Shatta Bandle in this video. He even has publications where he appears with banknotes. The African site Culturebène noted that he would be the friend of a rich Ghanaian businessman and that it is with the money of the latter that he makes his buzz. 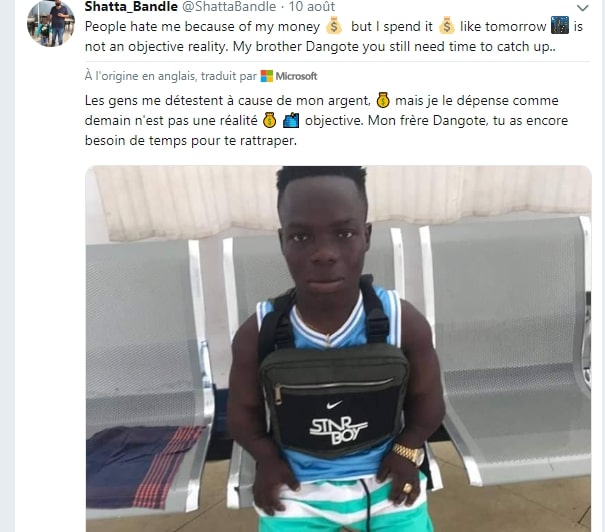 Dangote cement reportedly fires over 3000 staff without prior notice

In a photo on Instagram, it was seen that he was offering a car to one of his bodyguards.

Shatta Bandle, whose real name Idrissu Firdau is from Ghana. He is suffering from dwarfism. He was born in Karaga, a small town and capital of Karaga District, in the northern region of Ghana.