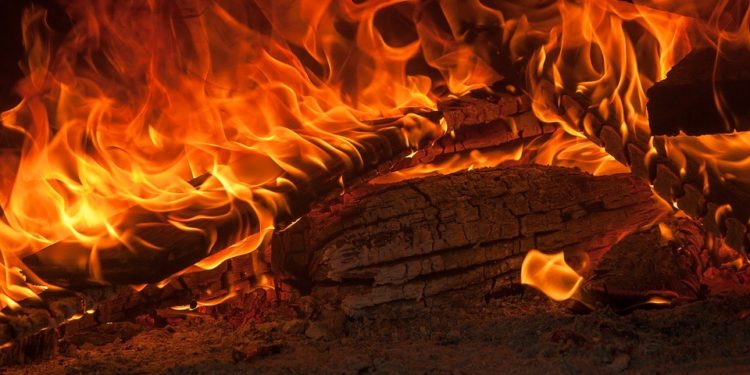 According to Nation reports, the fire outbreak began when a kerosene lantern exploded at about 7:30pm on Saturday night after a power outage.

It was gathered that when the kerosene lantern exploded, it set the mattress in the room on fire and seven-year-old Gideon Robert who was in the room when the explosion happened tried to drag the big mattress outside.

But Gideon’s effort only aggravated the fire as the fire spread to the curtains, forcing him to abandon the mattress in search of his grandmother.

By the time Gideon’s grandmother, 65-year-old Mrs Eno Roberts reached the scene, the fire had already started burning the house and spread to other rooms.

Mrs Roberts was said to have rushed into the room to try to retrieve the church money kept in her custody and in the process, the fire scourged her chest and burnt her wrapper.

When she failed to retrieve the money, she was said to have rushed out to alert the neighbours who came to the rescue but by then, the fire had spread to all the eight rooms in the house.

Unfortunately, efforts to put out the fire failed and the house was completely razed down leaving Mrs Robert, Gideon and five other male occupants of the house who were not around when the incident happened with only the clothes on their bodies.

Grandson of the victim, Mr Robert Usen who narrated the incident to our correspondent said, “My grandmother asked her seven-year-old grandson to give her the lantern and she poured the kerosene inside and lite the lantern.

“The lantern looked as if it was going to go off, so my grandmother dropped the lantern on the floor and immediately it exploded. The fire from the lantern dropped on the mattress. The young boy who was at the scene tried to drag the mattress out of the house through the door.

“But since the mattress was big, it got stuck at the door. The boy left the mattress to call his grandmother but before she arrived, the fire has already spread to the curtains.

“The woman then remembered she had money the Church gave her for safe keeping in the house and rushed to remove the money and in the process, the fire burnt her wrapper and the side of her chest, so she ran out and couldn’t remove anything. She started shouting.

“But before the neighbours came, the fire which had already entered the ceiling had spread into the eight rooms in the house occupied by 5 men in the family.

“When the incident happened some of these men were not around. So those of them who wore only shorts to go and play football lost everything except the clothes they had on their body to the fire.

“The kerosene was bought about 5 days away from the day of the incidence in the local market there and they have been using the kerosene, but it was almost finished when the incident happened,” he stated.

Usen said the incident was reported the next day to the Divisional Police in Ibiono Ibom and the Police visited the scene of the incident, and asked questions about where the kerosene was bought among others.

He said the Chairman of Ibiono Ibom has been informed of the incidence and attempts were being made to reach out to the government for assistance as the victims have been rendered homeless.

He explained that she is been kept under close watch as she was distraught at the incident, especially as she has been rendered homeless, adding that the village women were consoling her.