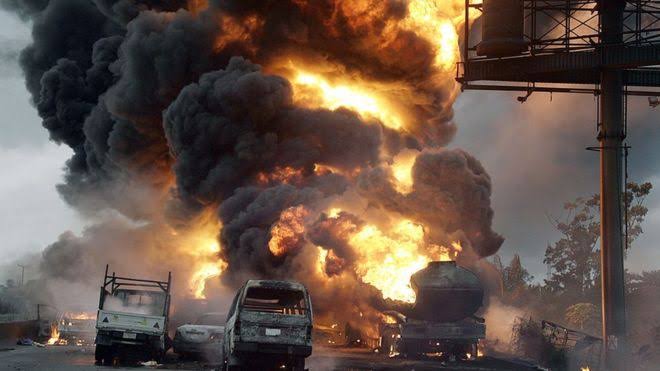 Five people reportedly lost their lives while 14 others were seriously injured in a road accident which occurred on Thursday at Oyoyo village in Owo Local Government Area of Ondo state. This is happening a day after mother, baby and many others lost their lives in fire incident that destroyed properties and goods worth billions of naira in Onitsha.

The four victims who were burnt beyond recognition were said to be travelling to Makurdi, Benue state when the accident happened.

The accident which was said to occur around 1 pm involved the 18- passenger bus with a registered number; MKD 341 XA and a Peugeot J5 bus with registration number; BDG 330 AP

Further disclosed that there was head-on collusion between the two vehicles, saying the vehicles went on fire immediately leading to the death of the five people who were burnt beyond recognition.

“Immediately the two vehicles collided, they caught fire and burnt all the occupants of the bus but about 14 of the occupants were rescued and taken to the hospital while five others were burnt beyond recognition.”

Also confirming the incident, the State Police Public Relations Officer (PPRO), Femi Joseph said the accident was caused by the recklessness of the drivers.

“It was a case of a head-on collision and the two vehicles went on fire burning five of the occupants beyond recognition.”

Joseph, however, said 14 people injured in the accident were rushed to the Federal Medical Center in Owo for medical attention and treatment.

He said the identities and addresses of the two drivers remained unknown but said the burnt vehicles which caused gridlock on the busy highway had been removed to allow free flow of traffic.