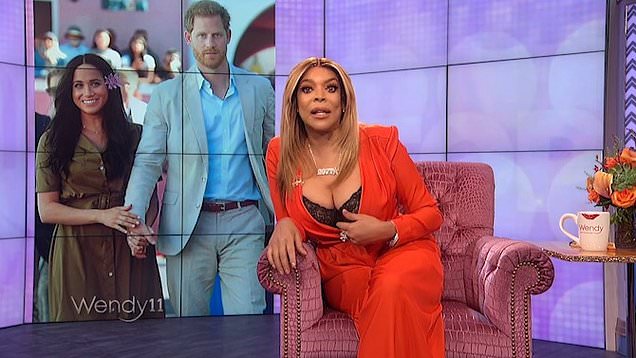 Wendy Williams revealed on her talk show on Tuesday that Duchess Meghan Markle once came for employment at her Wendy Show to be one of the ‘runway models’.

“We didn’t even know who you were except when you came for employment here at Wendy and wanted to be one of our runway models,” the talk show host said.

She didn’t give details.

She was reacting to an interview by the Duchess about the harassment of her family and person by British nosey tabloid media.

Meghan revealed the warning she received from her British friends that the British tabloids will destroy her life and that she didn’t quite understand why they should do so, adding “ I didn’t get it.”

Wendy in her response mocked the Duchess that she actually knew what she was doing in accepting the marriage and moving to England.

Wendy then said Meghan‘s British friends were probably actually “some hating ass girlfriend…Or Meghan‘s lying to try and get sympathy, for us to give her sympathy.”

“Harry and Meghan have nothing to lose by moving to America. Why not? Move to America and live part time in Africa like you want to do,” Wendy continued. “You have to still go back to England. Have a place in all three places. Have a mansion in Malibu, a big hut — I’ve never been to Africa, I don’t know — a big hotel or wherever you’re gonna live in Africa and then have your royal palace place in England.”

“I like them, but her there’s something about her, you know what I’m saying?” Wendy added.

“And you know what girl, Meghan, Meghan don’t be surprised at the paparazzi are everywhere. Of course, because you’re now a royal. They weren’t following you when you were on ‘Suits,’ we didn’t even know who you were except when you came for employment here at Wendy and wanted to be one of our runway models.”

“Meghan, nobody feels sorry for you. You knew what you were signing up for girl!” Wendy concluded.

Kevin Hunter blames Wendy Williams for fight with their son