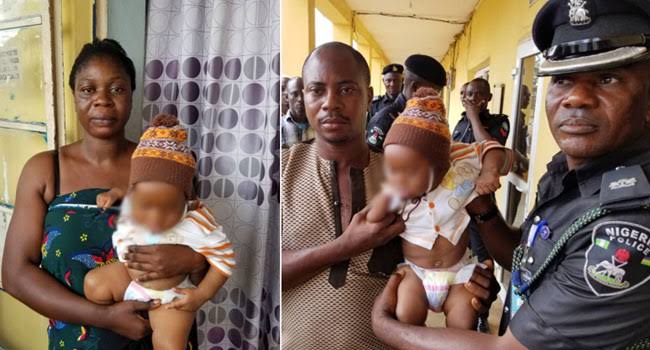 WITHIN NIGERIA learnt that the suspect identified as Falilat Olatunji was arrested after an organised search was launched immediately the mother of the baby, Taiwo Bello raised an alarm.

According to reports, Taiwo was reportedly doing laundry within her apartment when Falilat sneaked into her room and stole her baby.  The suspect was arrested after the police who were alerted after a search in the community was unsuccessful, saw her with a baby that fitted the description at Ilewo Orile.

In the course of investigating the matter, Falilat revealed that she was living in the same house with parents of the baby but she stole him to deceive her husband who she had already lied to about being pregnant.

While reacting to the development, the Police Public Relations Officer in the state, Abimbola Oyeyemi disclosed that “On interrogation, the suspect confessed to have stolen the baby on order to deceive her husband he was the product of the pregnancy she told him.

“Investigation revealed that the suspect was once squatting in the same house with the parents of the baby and that she was present during the naming ceremony of the same baby.

“The baby has been reunited with his parents. The Commissioner of Police Bashir Makama has ordered the immediate transfer of the suspect to State Criminal Investigation and Intelligence Department (SCIID) for further investigation and prosecution.

“He appealed to members of the public to always beware of people around them because there are a lot of wolves in human skin”.