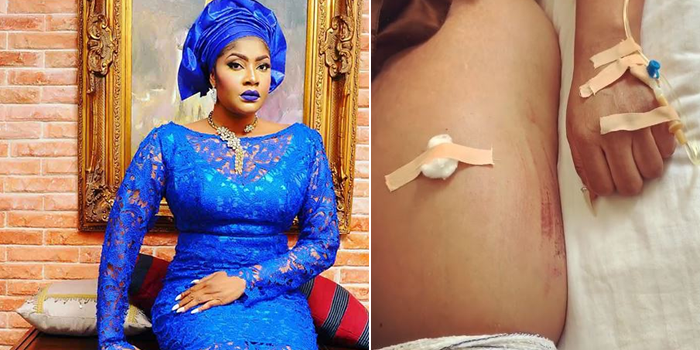 Angela Okorie Calls Out Quilox Club After An Accident (video)

Nollywood actress, Angela Okorie  just announced that she fell into a drainage facility while coming out of the popular nightclub  Quilox yesterday night.

She uploaded a video of herself on the sickbed with her left hip severely bruised due to the gravity of the fall. In the short video clip, she appeared so weak and in pains and drips were attached to her body.

The actress urged the management of the club house owned by a Lagos socialite and House of Reps member, Shina Peller to cover the drainage to forestall a repeat of her present predicament.

Coming out of @clubquilox this morning I fell into the drainage at the car park. It was a bad experience, please quickly do something about those opened gutters before it kills someone. Other people might not have the grace to survive such incident. But I thank God For his grace over my life
Am doing this because it’s necessary Not to talk down on the club. But for corrections to be made so it doesn’t happen to some one else. Thank you