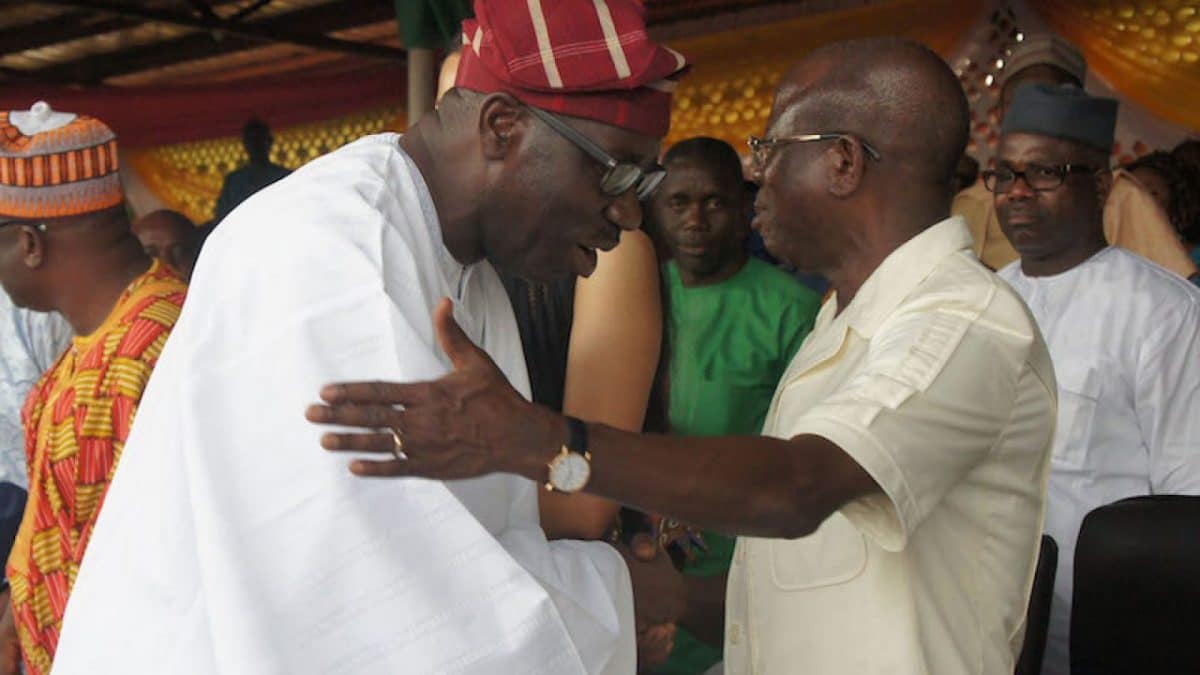 The National Chairman of the All Progressives Congress, Comrade Adams Oshiomhole, has apologised to the Governor of Edo State, Godwin Obaseki,Oba of Lagos, Oba Rilwan Akiolu, and Chancellor of the Edo State University, Iyahmo, Dr. Makanjuola, over the recent attack on their convoy at his (Oshiomhole) country home in Estako West Local Government.

WITHIN NIGERIA reported how thugs attacked them at  Oshiomhole’s residence.

Meanwhile,the former Edo State Governor, Oshiomhole said the people that carried out the attack were the thugs who invaded the university community on the orders of the Deputy Governor of the state, Hon Philip Shaibu.

According to Oshiomhole, the tension in the community started last Friday when Shaibu allegedly imported thugs into the community with a view to intimidate political opponents.

This was contained in a press statement issued by his Chief Press Secretary, Mr. Simon Ebegbulem, where the APC National Chairman pointed out that he left the convocation lecture on Thursday through the back so as to avoid being attacked by the thugs who laid siege at the entrance gate of the university.

“Security operatives accosted them at the gate and refused them entrance. The thugs started threatening the security operatives who insisted the deputy governor can enter the venue but they will not allow the thugs to gain access.

“Following their threats the security operatives tear gassed the thugs and the deputy governor. The thugs were dispersed while the deputy governor joined other dignitaries at the venue. This created tension already in the small community.

“However, after the event, Comrade Oshiomhole invited the Oba of Lagos, the Chancellor and others for lunch at his country home which is right opposite the university. Consequently, he left instruction at the gate that he was expecting these respected leaders.

“So when the visitors came, the governor drove in a bus with other officials but following the incident that occurred earlier where thugs sponsored by the deputy governor invaded the university, Iyamho youths barricaded the gate of the national chairman with a view to protecting him against any harm.

“Unfortunately, these youths sighted Andrew Momodu, Osaigbovo Iyoha in the bus which conveyed the governor to Oshiomhole’s residence. They decided to stop them from entering the compound because these were the same people who led the thugs that attacked Oshiomhole’s residence in Benin City penultimate week.

“While this confusion was on, the thugs brought by the deputy governor started destroying the vehicles belonging to Oshiomhole’s kinsmen.

“I want to state clearly that the vehicles destroyed were not in the convoy of the governor. The thugs targeted the vehicles belonging to Oshiomhole’s relations and friend and destroyed them. Thank God for the intervention of soldiers and other security operatives who came to restore peace.

“This would not have happened if not for the thugs who invaded the community loyal to the deputy governor.

“However, Comrade Oshiomhole expresses his sincere apologies to the governor, the revered Oba of Lagos and the Chancellor over the unfortunate incident.”