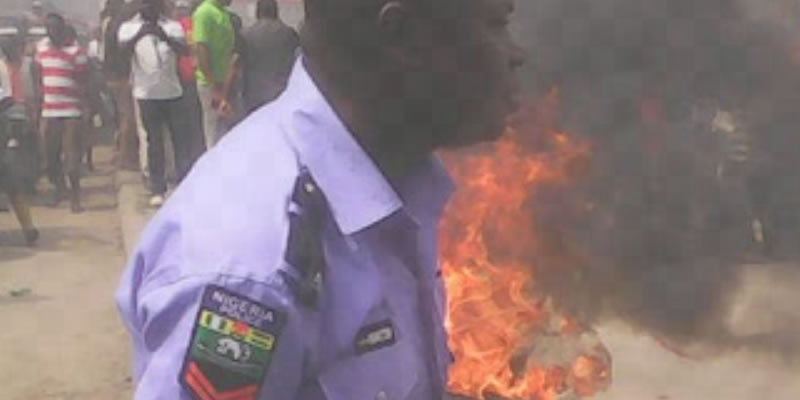 PHOTO FOR ILLUSTRATION ONLY
Metro

A 23-year old man, simply identified as Samuel, has been lynched to death by angry mob for allegedly attempting to use a 4-year old girl for ritual in Awka, Anambra state.

The deceased, from Benue State and a driver with a private school in the area, was said to have attempted to kill the little girl in her mother’s shop while she was away.

It was reported that the mother of the victim, a petty trader, had gone to buy food for the daughter when she was attacked by the suspect.

Narrating  her ordeal to newsmen, Mrs. Ginika Eze, a native of Alumona-Nsukka, Enugu state alleged that the deceased mission was to kill her daughter for ritual purposes.

She said, “I brought my daughter to stay with me at the shop so at to keep eye on her since her school was on mid-term break.

“When she complained she was hungry and wanted to eat beans with bread for lunch, I dashed to a nearby shop to buy the items.

Lady narrates how she delivered her baby by herself in traffic,…

“It was not long my attention was drawn to my stall where my daughter was struggling with a man almost half necked.

“He was kissing her and fondling her breast, while muttering, “I must drink your blood.”

The 42-year-old woman said she had to raise alarm as the man was already kissing her all over her face and was about to defile her.

“Luckily, some boys within the area ran to the scene of the incident and started dragging my daughter with him.

“By then, blood was already dropping from her face as the man held her tight in his arms.”

She however said she was able to retrieve daughter and rushed her to a hospital where she was receiving treatment.

Eyewitness account ,  claimed the deceased was shouting for blood and was about to suck the girl’s blood before he was lynched.

He said the father of the deceased had already been contacted.

Speaking with newsmen,  the Police spokesperson, Haruna Mohammed confirmed the incident, he  said the deceased was probably under the influence of some hard drugs.

He said, “He captured the 4-year-old girl and was molesting her sexually before he was arrested by some civilians who carried out jungle justice on him.

“When the police arrived the scene, the boy, who was probably in his late 20s, was lying motionless on the ground while his assailants had dispersed.

“He was taken to a nearby hospital, where he was confirmed dead. Investigations are still on to ascertain what transpired and to arrest perpetrators of the crime.”

Mohammed however said no arrests had been made, adding that the victim was stable and responding to treatment.