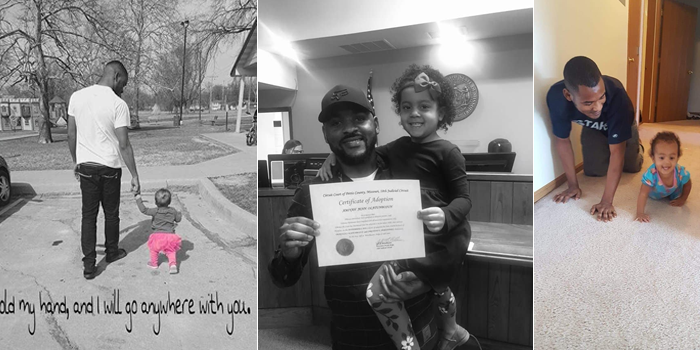 According to him, the journey began the day he met the love of his life, who opened up to him about the fact that she’s a single mother with a very clingy 7-month-old child.

He accepted the fact that she has a child, and the lady invited him to her house 2 months later, to meet with her daughter.

On getting there, the lady reminded him of the fact that her daughter doesn’t roll with anyone including her family members, so peradventure she cries, he would be prepared for it.

He accepted and got into the room to meet the little baby sitting on the floor with her toys. He went closer, smiled with her and BOOM! They clicked. It was like they knew each other all along.

Subsequently, he also got to know that the baby’s father had no interest in his daughter, as he only visits once in a while and then disappears.

He reached out to her baby daddy and they spoke for sometime about his attitude with his daughter and how she deserves better. After the discussion at that time, he totally stopped taking his calls or texts.

After a long while, baby-daddy finally called, requesting for his daughter’s presence at his niece’s birthday party.

They gave in to the request and made for the party. At the party, the babydaddy tried to carry his daughter but she declined. This provoked the man and he stormed out in anger.

Later, he sent a text revealing his decision to stay away from the girl’s life as she deserves better than what he gives her.

Currently, he has officially adopted her and she now bears his surname. He has also expressed the fact that he’s ready to give her everything in the world.

NYSC sacks two female corps members for refusing to wear trousers, with claims that it’s against their faith