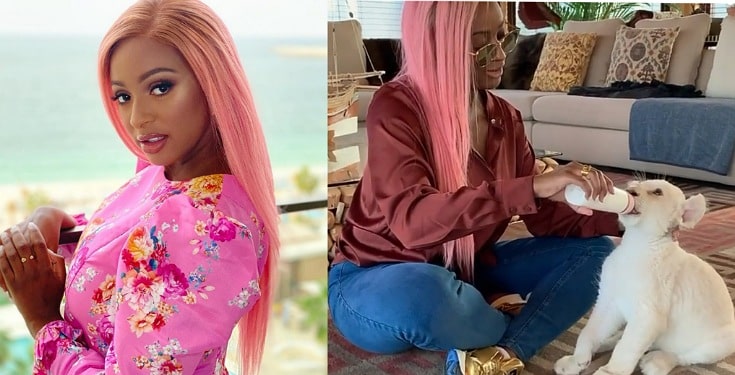 Billionaire daughter, Florence Otedola aka DJ Cuppy has shared an adorable video of herself feeding a baby lion which was named after her in Dubai.

The ‘Gelato’ crooner who is currently on a visit to Dubai with her father, Femi Otedola visited the Fame park today, and there she met with ‘Little Cuppy’, a baby lion in the park.

“Introducing the world to Cuppy, Baby lion named after me by @Sb Belhaza, owner of Fame park, I’ve always wanted to be a mother”.

In the video, Dj Cuppy could be seen feeding the baby lion with milk while admiring it’s beauty.

Introducing the world to “Cuppy” the newest baby lion named after ME at #FamePark Dubai!!!🤱🏽💕🦁 I’ve always wanted to be a mother! #MamaCups pic.twitter.com/rvVuXVGtcN

DJ Cuppy visited an Emirati entrepreneur, Ahmad Belhasa, at his private residence in Dubai where she spent time with his animals.

In another post on Instagram, she described Mr Belhasa as an ‘inspiration’. Belhasa, on his part, said it was a ‘great pleasure’ to have Cuppy at his farm.

VIDEO: How Singer Niniola made an elderly man unleash emergency dancing skill on…

How Suspected Rapist Charmed Victim, Raped And Stole Her Underwear

How Suspected Rapist Charmed Victim, Raped And Stole Her Underwear

We are setting up facilities to diagnose Coronavirus – FG