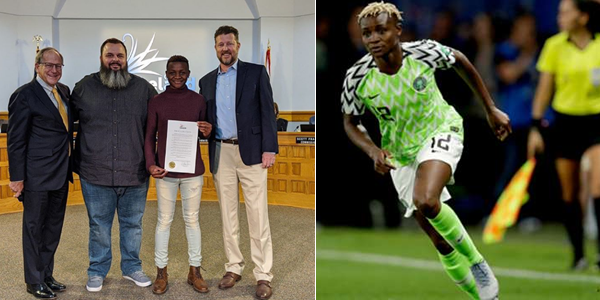 Uchenna Kanu, Super Falcons forward, has been honoured in the United States as November 18 of every year has been declared ‘Uchenna Kanu Day’.

The 22-year-old Super Falcons forward currently plays for Pensacola FC Women team where she has scored 17 goals in 12 appearances.

Before joining the Women’s Premier Soccer League side in 2018, she spent two years with the Southeastern Fire, scoring 115 goals in just 55 matches.

Her performances have however been noticed as the mayor of the City of Lakeland declared the earlier stated day to celebrate the Nigerian star.

“November 18 has been declared Uchenna Kanu Day by the mayor of the City of Lakeland!.

“Uchenna received the Key to the City today, and we’re so proud of her and all she’s accomplished as an SEU student and as soccer player for SEU and her home country of Nigeria.”

Weeks after imposing travel ban on Nigerians, US introduces tougher…

Iranian students with valid visas sent home upon arrival at US…

Kanu was part of Nigeria’s national women’s team that crashed out in the second round at the 2019 FIFA Women’s World Cup in France. She featured in all four games but failed to find the back of the net all through the tournament in the European country.

Uchenna grew through the ranks in the Nigerian football terrain having started her national team career with the country’s U17 team.

She spearheaded their attack to the U17 FIFA World Cup Asisat Oshoala was among the goal s for Barcelona women’s side in their 5-0 win over Logrono.

Davido has a secret wife since 2017, Kemi Olunloyo reveals

Davido has a secret wife since 2017, Kemi Olunloyo reveals