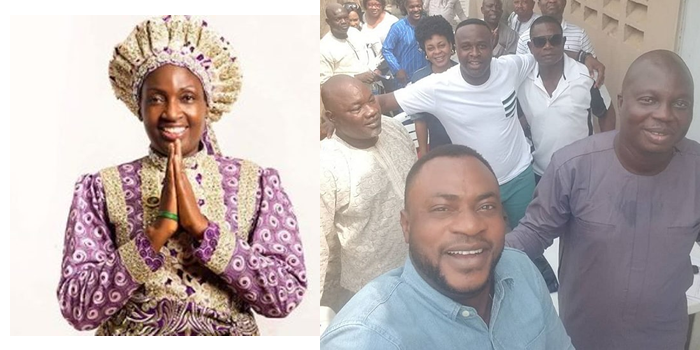 There’s no doubt about it that the new icon of the white garment churches in Nigeria and by extension, across the globe is a good thing to so many people, in fact she’s like a ray of good sunshine, a rainbow that emerged at the end of tunnel for so many downtrodden.

She’s a beacon of light and hope for the white garment churches that she has tried as much as possible to unite as one, especially as they had been subjected to so many unpalatable scrutiny for many years now, with people claiming they are more into spiritism and occultic practises than what they profess or claim to be.

So since she emerged on the scene, and with her showcase of extraordinary philanthropic activities through her “Esther Ajayi Foundation” many had begun to see that sector of the church in another light again.

TAMPAN members made the declaration at a special meeting held at Sheraton Hotel, Ikeja, Lagos.

The meeting which began with a prayer by Adekola Odunlade and an introduction of TAMPAN team by Yomi Fash Lanso, soon dove-tailed into the essence of the visit by their President, Otunba Bolaji Amusan, popularly called Mr Latin. Expressing his appreciation to the prayerful woman of God, Mr Latin described Rev. Mother Esther Abimbola Ajayi fondly called Iya Adura as a rare Nigerian who does good, without bias. “When our Exco resumed, it was Baba Suwe’s health issue we met.

We took him to LUTH and while running around for help, the good news came that Rev. Mother Esther Ajayi had paid the 10 million naira needed for his treatment abroad.

” As if that was not enough, she also paid the medical Bill of another member of our association, Alabi Yellow. So we just came to thank you ma. Your type is uncommon”, Mr Latin said.

After his appreciation, Mr Latin on behalf of the association then pleaded with Iya Adura to accept their offer to become the Matron of TAMPAN.

Another veteran artiste on the entourage, Prince Jide Kosoko, made yet another request that the annointed woman of God should accept to be the Special Guest of Honour at the association’s annual convention holding in Ibadan, Oyo State, on December 12, 2019.

“We host this event annually at different locations in the country and celebrate an icon who has imparted lives. This year, it will hold in Ibadan and we consider you to be our special guest that we shall honour”.

Rev. Mother Esther Ajayi then consulted with some of her aides, members of Love of Christ Generation Church and after putting calls through to her children in London and reaching a consensus, accepted the offer to become the Matron of TAMPAN and agreed to attend the 2019 edition.

Watch video from the event below: